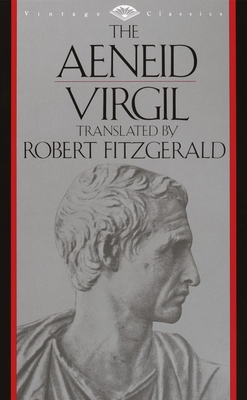 "Fitzgerald's [translation] is so decisively the best modern Aeneid that it is unthinkable that anyone will want to use any other version for a long time to come." —New York Review of Books

Virgil's great epic transforms the Homeric tradition into a triumphal statement of the Roman civilizing mission—translated by Robert Fitzgerald.

Virgil (70 B.C-19 B.C) is regarded as the greatest Roman poet, known for his epic, The Aeneid (written about 29 B.C. unfinished). Virgil was born on October 15, 70 B.C., in a small village near Mantua in Northern Italy. He attended school at Cremona and Milan, and then went to Rome, where he studied mathematics, medicine and rhetoric, and completed his studies in Naples. Between 42 and 37 B.C. Virgil composed pastoral poems known as Ecologues, and spent years on the Georgics.At the urging of Augustus Caesar, Virgil began to write The Aeneid, a poem of the glory of Rome under Caesars rule. Virgil devoted the remaining time of his life, from 30 to 19 B.C., to the composition of The Aeneid, the national epic of Rome and to glory of the Empire. The poet died in 19 B.C of a fever he contracted on his visit to Greece with the Emperor. It is said that the poet had instructed his executor Varius to destroy The Aeneid, but Augustus ordered Varius to ignore this request, and the poem was published.

"Fitzgerald's is so decisively the best modern Aeneid that it is unthinkable that anyone will want to use any other version for a long time to come." —New York Review of Books

"From the beginning to the end of this English poem ... the reader will find the same sure control of English rhythms, the same deft phrasing, and an energy which urges the eye onward." —The New Republic

"A rendering that is both marvelously readable and scrupulously faithful.... Fitzgerald has managed, by a sensitive use of faintly archaic vocabulary and a keen ear for sound and rhythm, to suggest the solemnity and the movement of Virgil's poetry as no previous translator has done (including Dryden).... This is a sustained achievement of beauty and power." —Boston Globe