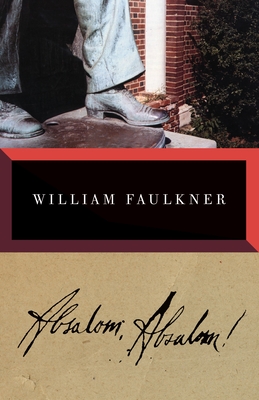 NOBEL PRIZE WINNER • Family drama and the legacy of slavery haunt this epic tale of an enigmatic stranger in Jefferson, Mississippi—from one of the most acclaimed writers of the twentieth century.

“Read, read, read. Read everything—trash, classics, good and bad, and see how they do it. Just like a carpenter who works as an apprentice and studies the master. Read! You’ll absorb it. Then write. If it is good, you’ll find out. If it’s not, throw it out the window.” —William Faulkner

Absalom, Absalom! is Faulkner’s epic tale of Thomas Sutpen, a man who comes to the South in the early 1830s to wrest his mansion out of the muddy bottoms of the north Mississippi wilderness. He was a man, Faulkner said, “who wanted sons and the sons destroyed him.”

WILLIAM CUTHBERT FAULKNER was born in 1897 and raised in Oxford, Mississippi, where he spent most of his life. One of the towering figures of American literature, he is the author of The Sound and the Fury, Absalom, Absalom!, and As I Lay Dying, among many other  remarkable books. Faulkner was awarded the Nobel Prize in 1950 and France’s Legion of Honor in 1951. He died in 1962.

“For range of effect, philosophical weight, originality of style, variety of characterization, humor, and tragic intensity, [Faulkner’s works] are without equal in our time and country.” —Robert Penn Warren

“He is the greatest artist the South has produced.... Indeed, through his many novels and short stories, Faulkner fights out the moral problem which was repressed after the nineteenth century [yet] for all his concern with the South, Faulkner was actually seeking out the nature of man. Thus we must turn to him for that continuity of moral purpose which made for greatness of our classics.” —Ralph Ellison