In Asian Waters: Oceanic Worlds from Yemen to Yokohama (Hardcover) 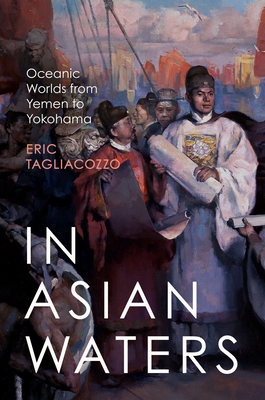 A sweeping account of how the sea routes of Asia have transformed a vast expanse of the globe over the past five hundred years, powerfully shaping the modern world

In the centuries leading up to our own, the volume of traffic across Asian sea routes--an area stretching from East Africa and the Middle East to Japan--grew dramatically, eventually making them the busiest in the world. The result was a massive circulation of people, commodities, religion, culture, technology, and ideas. In this book, Eric Tagliacozzo chronicles how the seas and oceans of Asia have shaped the history of the largest continent for the past half millennium, leaving an indelible mark on the modern world in the process. Paying special attention to migration, trade, the environment, and cities, In Asian Waters examines the long history of contact between China and East Africa, the spread of Hinduism and Buddhism across the Bay of Bengal, and the intertwined histories of Islam and Christianity in the Philippines. The book illustrates how India became central to the spice trade, how the Indian Ocean became a "British lake" between the seventeenth and nineteenth centuries, and how lighthouses and sea mapping played important roles in imperialism. The volume ends by asking what may happen if China comes to rule the waves of Asia, as Britain once did. A novel account showing how Asian history can be seen as a whole when seen from the water, In Asian Waters presents a voyage into a past that is still alive in the present.

Eric Tagliacozzo is the John Stambaugh Professor of History at Cornell University. His many books include Secret Trades, Porous Borders: Smuggling and States along a Southeast Asian Frontier, 1865-1915 and The Longest Journey: Southeast Asians and the Pilgrimage to Mecca.