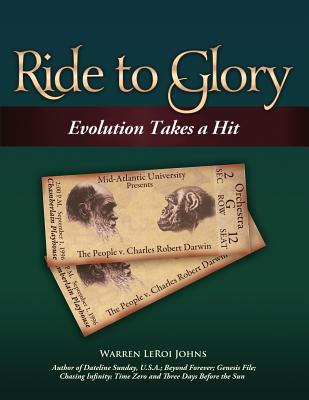 Ride to Glory represents literary fiction while its endnoted academic references are fact. Bridging the gap between fact and fiction runs the risk falling short of either objective. These five-star reviews of the original edition suggests, in some minds at least, both goals have been met successfully.

Ride to Glory, an American novel, exposes some of Charles Darwin's  more shaky suppositions in a fictional courtroom battle. Billed as Monkey II, the mock trial picks up where the 1925 Scopes "trial of the century"  left off, debating the hot-button  issue: "Is Evolution Fact or Fantasy?"

Off-stage, the young star's week-in-the-sun encounters roller coaster emotional highs and lows-featurng a reckless Ride to Glory astride Turbo, his prized Arabian mount. Not until the tumultuous week's end do the bleak fortunes of Josh Ryan swing in his favor---thanks to a stellar Monkey II performance and a manipulative grandmother who dexterously laces, pulls, and ties strings of  intrigue.

Ride to Glory's storyline boasts an academic bibliography, fortified with endnotes packed with solid reference data that reinforce the obstreperous onstage testimony. In a plot wired for unexpected twists and turns, Charles Robert Darwin's conjectures wind up with the  short straw.

The chance hypothesis dogma projects a secular religion that worships at the shrine of faith in random chaos. The Ride to Glory author cherishes belief that all life, and its ecological supporting system, exists as the gift of an Infinite Creator who endows each soul with free choice and eternal purpose. Science and religion are not in conflict. The Giver of life is the Author of all science

The eternal, all powerful God of the universe declared: "It is I who made the earth and created mankind upon it.My own hands stretched out the heavens; I marshaled their starry hosts."Isaiah 45:12, The Holy Bible, New International Version