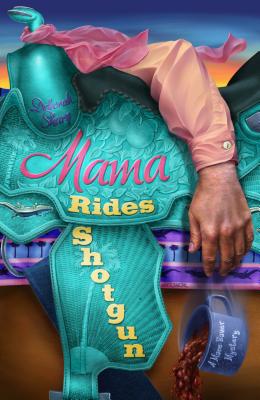 This is book number 2 in the Mace Bauer Mysteries series.

Mama's fixin' to get hitched to Husband #5. But first, she coerces her daughter, Mace, to saddle up for some country-gal bonding on the Florida Cracker Trail. The trek takes a deadly turn when Lawton Bramble--wealthy rancher and one-time beau of Mama's--keels over in his Cow Hunter Chili.

Lawton had a horde of enemies and a famously bad ticker. Could a grudge-wielding rival have spiced the cattleman's chow? With (or maybe despite) the help of her sisters and her sexy ex-beau, Detective Martinez, Mace sets out to corral a low-down varmint who's determined to kill again.

Praise for Mama Does Time, the first Mace Bauer Mystery:

Who knew that a who-dun-it would not only keep you guessing--but have you laughing Deborah Sharp is the new Edna Buchanan.--Hoda Kotb, NBC Today Show co-anchor

A humorous, touching reflection on familial love and politics.--Mystery Scene

Like the main character in her "Mace Bauer Mysteries, '' her family roots were set in Florida long before Disney or Miami Vice. As a native and former reporter for USA Today, she knows the spots not found on maps: Molasses Junction. Muse, and now, Himmarshee, her own tiny slice of "Authentic Florida.'' To create Himmarshee, Deborah borrowed from the present-day ranching town of Okeechobee, and from the south Florida of her family's past. Not far from Ft. Lauderdale, her dad used to walk to town, leading the family cow. A generation later, Deborah rode her horse over the same citrus- and ranch-dotted terrain. Now, it's all interstates and strip malls. The difference between Mace's hometown and hers: Deborah will never let Himmarshee be spoiled by sprawl. The News-Press in Fort Myers gave Deborah her first job, in 1982. Her favorite assignment: getting cast as a zombie when Day of the Dead filmed on Sanibel Island. Her fellow extras raved about her lurching. A News-Press bonus: she met TV reporter Kerry Sanders in Immokalee, both of them shivering at dawn to see whether a winter freeze would ruin the green pepper crop. They've been married since 1989. No kids; no pets, but had goldfish once. Turned out badly--not a good omen for higher life forms. When they moved back to Deborah's hometown in 1991, the occasional stories she'd been writing for USA Today became a flood. Miami's loony nature gives it a lock on headlines. And then, 9/11, and everything changed. One of her last assignments before she left the paper was profiling soldiers killed in war. Grieving parents; spouses; kids. She couldn't absorb all that sadness anymore. So, at age fifty, fiction-writing beckoned. She'd get to determine the endings. Punish the bad and reward the good. And, she'd throw in some romance, too. She likes writing about Mama because the character makes her laugh. And doesn't everyone need a smile now and then? TV APPEARANCES ◊ NBC's Today Show from November 4, 2008 ◊ Mayor's Book Talk from January 14, 2009 ◊ NBC6 South Florida Today. from July 17, 2009 ◊ NBC's Today Show from August 4, 2009 ◊ WJXT-TV from November 17, 2009 ◊ NBC's Today Show from August 24, 2010 ◊ NBC's Today Show from December 28, 2011