The Irregulars: Roald Dahl and the British Spy Ring in Wartime Washington (Paperback) 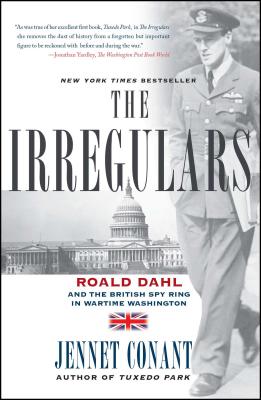 Following her extraordinary, bestselling, and much-acclaimed accounts of the most guarded secrets of the Second World War, here is a rollicking true story of spies, politicians, journalists, and intrigue in the highest circles of Washington during the tumultuous days of World War II.

When Roald Dahl, a dashing young wounded RAF pilot, took up his post at the British Embassy in 1942, his assignment was to use his good looks, wit, and considerable charm to gain access to the most powerful figures in American political life. Better than any spy fiction, The Irregulars is a fascinating, lively account of deceit, double dealing, and moral ambiguity—all in the name of victory. Richly detailed and carefully researched, Conant’s masterful narrative is based on never-before-seen wartime letters, diaries, and interviews.

Jennet Conant is the author of Man of the Hour: James B. Conant, Warrior Scientist, and the New York Times bestsellers The Irregulars: Roald Dahl and the British Spy Ring in Wartime Washington and Tuxedo Park: A Wall Street Tycoon and the Secret Palace of Science That Changed the Course of World War II. She has written for Vanity Fair, Esquire, GQ, Newsweek, and The New York Times. She lives in New York City and Sag Harbor, New York.

"A fascinating glimpse of the intrigue and spying inside the British-American alliance in wartime Washington." -- Ben Bradlee

"Jennet Conant's new book is pure pleasure. Immensely intelligent and entertaining, with a narrative so strongly fashioned it reads, and compels, like the best fiction. All the complexities of friends spying on friends, yet as good a weekend companion as you'll find this year." -- Alan Furst, author of The Spies of Warsaw

"With grace and insight and an unerring eye for the telling human detail, Jennet Conant has given us an entertaining and enlightening account of a long-forgotten but essential chapter of the Second World War: the British espionage operations based in Washington during those epic days. By recovering Roald Dahl, the man at the center of seemingly everything, and placing him and his shadowy work in historical context, Conant has shed fresh light on the complexities and contradictions of the 'special relationship' between Roosevelt and Churchill and their nations. This is a terrific tale -- and it's all true, proving anew that history trumps even the most vivid fiction." -- Jon Meacham, author of Franklin and Winston: An Intimate Portrait of an Epic Friendship