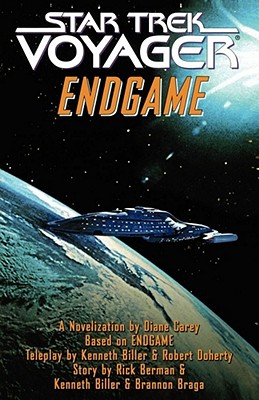 For seven tumultuous years, the U.S.S. Voyager™ has explored the Delta Quadrant, encountering strange alien civilizations and bizarre space-time anomalies as it steadfastly made its way back toward the safety of Federation space. Captain Kathryn Janeway and her heroic crew have faced all manner of harrowing danger and hostile life-forms -- including the Kazons, the Borg, and the Q -- while never losing sight of their ultimate goal: home. Now, at last, Voyager's epic trek may be nearing its end...
After so many perilous and astounding adventures, will Captain Janeway finally bring her wayward starship back to the Alpha Quadrant? And what will become of her diverse yet tightly knit crew? Will Chakotay, B'Elanna Torres, and the other former Maquis freedom fighters face long-delayed justice for their crimes against the Federation? And is there any place in Starfleet for the uniquely independent Borg known as Seven of Nine?
As the ultimate destiny of Voyager is revealed, all that is certain is that nothing will ever be the same!

Diane Carey is the bestselling author of numerous acclaimed Star Trek® novels, including Final Frontier, Best Destiny, Ship of the Line, Challenger, Wagon Train to the Stars, First Strike, The Great Starship Race, Dreadnought!, Ghost Ship, Station Rage, Ancient Blood, Fire Ship, Call to arms, Sacrifice of Angels, and Starfleet Academy. She has also written the novelizations of such episodes as The Way of the Warrior, Trials and Tribble-ations, Flashback, Equinox, Decent, What You Leave Behind, and End Game. She lives in Owasso, Michigan

New York Times bestselling and award-winning author Christie Golden has written more than forty novels and several short stories in the fields of science fiction, fantasy, and horror. Among her many projects are over a dozen Star Trek novels and several original fantasy novels. An avid player of World of Warcraft, she has written two manga short stories and several novels in that world. Golden lives in Tennessee. She welcomes visitors to her website: ChristieGolden.com.