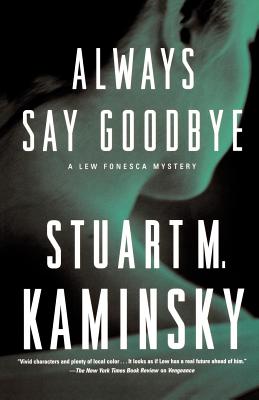 This is book number 5 in the Lew Fonesca series.

Four years ago, Lew Fonesca's wife Catherine was struck and killed in a hit-and-run. Grief-stricken, he fled to Chicago and wound up in Sarasota, Florida where he's made a living as a process server. Four years on, he's still savoring his depression like fine wine, and his therapist--and sparring partner--has had enough. It's time, she tells Lew, to get on with his life. Time to go back to Chicago and find out what really happened to his wife.


Lew hates to admit it, but Ann Horowitz might be right. Even if it kills him, he has to know the truth about his wife's death. So he returns to his home, his family, his friends--and a mystery.

He's resolved to dig until he finds out who killed his wife. In doing so, he'll uncover both sweet and painful memories of his past. He'll also confront a murderer who'll not hesitate to kill again to make sure hidden secrets stay buried.

Stuart M. Kaminsky was the author of more than 60 novels and an Edgar Award winner who was given the coveted Grand Master Award by the Mystery Writers of America. His series include the Lew Fonesca, Inspector Rostnikov, Toby Peters, and Abe Lieberman mysteries, which includes such titles as Terror Town, The Last Dark Place, and Not Quite Kosher. He passed away in the fall of 2009.

“Kaminsky adds all of the touches that have distinguished his books over the past thirty years...he also adds an incredibly taunt plot that keeps twisting back on itself and a genuine feel for Chicago's wonderfully ethnic neighborhoods. This is the kind of book that shows why Kaminsky has been named a Grand Master by the Mystery Writers of America.” —Mystery Scene on Always Say Goodbye

“Stacked with vivid characters and plenty of local color…it looks as if Lew has a real future ahead of him.” —The New York Times Book Review on Vengeance

“Kaminsky's sense of place is faultless…he grabs readers and takes them on a memorably tumultuous ride of violent dips and turns.” —Publishers Weekly (starred) on Vengeance