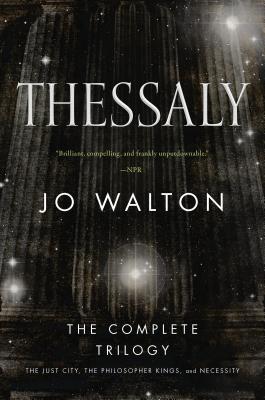 The goddess Athena thought she was creating a utopia. Populate the island of Thera with extraordinary men, women, and children from throughout history, and watch as the mortals forge a harmonious society based on the tenets of Plato’s Republic.

Meanwhile, following his famous spurning by a nymph, Athena's ever-curious brother Apollo has decided to live a mortal human life on the island, in an effort to gain a better understanding of humanity.

But as both Athena and Apollo soon discover, even the Just City is susceptible to the iron law that nothing ever happens as planned. And there are sins in Paradise, mortal and divine, far graver than the everyday ones.

In an epic encompassing sandy Mediterranean shores and the farthest reaches of the galaxy, Victorian England and Renaissance Italy, gods and humans argue, fight, love, and most of all, learn from one another, in critically-acclaimed author Jo Walton's unique exploration of the human condition,Thessaly.

JO WALTON won the Hugo and Nebula Awards for her novel Among Others and the Tiptree Award for her novel My Real Children. Before that, she won the John W. Campbell Award for Best New Writer, and her novel Tooth and Claw won the World Fantasy Award. The novels of her Small Change sequence—Farthing, Ha'penny, and Half a Crown—have won acclaim ranging from national newspapers to the Romantic Times Critics' Choice Award. A native of Wales, she lives in Montreal.

"As skilled in execution as it is fascinating in premise." —Library Journal (starred review) on The Just City

"Walton shines, as she always does, in the small and hurtful and glorious business of interpersonal relationships...this book about philosophy, history, gender and freedom also manages to be a spectacular coming-of-age tale that encompasses everything from courtroom dramas to sexual intrigue." —Cory Doctorow, Boing Boing on The Just City

"Brilliant, compelling, and frankly unputdownable." —NPR on The Just City

"A remarkable novel of ideas...Superb. In the end, the novel does more than justice to the idea of the Just City." —Booklist (starred review) on The Just City

"Rendered with Walton's usual power and beauty...It's this haunting character complexity that ultimately holds the reader captive to the tale." —N. K. Jemisin, New York Times, on My Real Children

"Has as much in common with an Alice Munro story as it does with, say, Philip K. Dick's The Man in the High Castle." —Lev Grossman, Publishers Weekly, on My Real Children