Who's Looking Out for You? (Paperback) 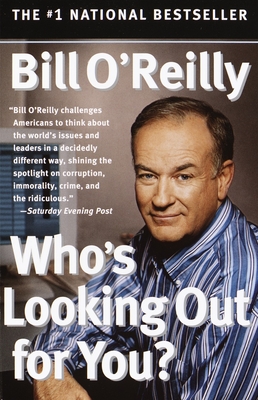 From the mega-bestselling author of The O'Reilly Factor and The No Spin Zone, a no-holds-barred exposé of the people and institutions who are letting Americans down – and what we should do about it.


Bill O’Reilly is mad as hell – and he’s not going to let you take it anymore. In his most powerful and personal book yet, this media powerhouse and unstoppable truth-teller takes on those individuals and institutions in American life who are failing in their duties – big-time. In his inimitable style, mixing wit, pugnacity, and plain common sense, O’Reilly kicks butt and takes (and also names) names – from crooked corporate weasels to venal politicians to lazy and/or politically correct bureaucrats to sexually predatory priests and the Church hierarchy that protects them to a media establishment rife with political bias and economically hooked on violence and smut. At the same time that he calls the famous and powerful to account, he dares to get personal, questioning just how much our closest friends, families, and lovers do look out for us, and delivering a powerful message about personal responsibility and self-reliance in an uncertain world. He forces us to ask just how much genuine altruism is left in a society that thrives on self-indulgence and ruthless competition.
Who’s Looking Out for You? is a book that boldly confronts our worst fears and biggest problems in a post-9/11, post-corporate-meltdown world. Its sage, candid advice on regaining control and trust in these troubled times will resonate with the millions of readers and viewers who have come to believe in Bill O’Reilly as the man who speaks for them.

BILL O’REILLY, a two-time Emmy Award-winner for excellence in reporting, served as national correspondent for ABC News and as anchor of the nationally syndicated news magazine program Inside Edition before becoming executive producer and anchor of Fox News's wildly popular The O'Reilly Factor. Also the author of the novel Those Who Trespass, he holds master’s degrees from Harvard’s Kennedy School of Government and Boston University.


“An appealing and occasionally moving book. [O’Reilly] emerges here as a feisty . . . defender of the little guy.”
—Denver Post