The Enemy At Home: The Cultural Left and Its Responsibility for 9/11 (Paperback) 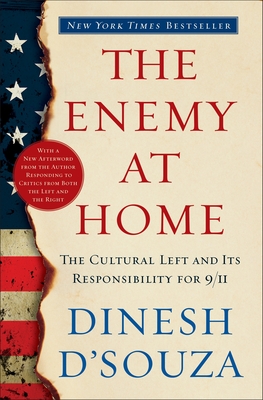 From THE ENEMY AT HOME:

“In this book I make a claim that will seem startling at the outset. The cultural left in this country is responsible for causing 9/11. … In faulting the cultural left, I am not making the absurd accusation that this group blew up the World Trade Center and the Pentagon. I am saying that the cultural left and its allies in Congress, the media, Hollywood, the nonprofit sector, and the universities are the primary cause of the volcano of anger toward America that is erupting from the Islamic world. The Muslims who carried out the 9/11 attacks were the product of this visceral rage—some of it based on legitimate concerns, some of it based on wrongful prejudice, but all of it fueled and encouraged by the cultural left. Thus without the cultural left, 9/11 would not have happened.

“I realize that this is a strong charge, one that no one has made before. But it is a neglected aspect of the 9/11 debate, and it is critical to understanding the current controversy over the ‘war against terrorism.’ … I intend to show that the left has actively fostered the intense hatred of America that has led to numerous attacks such as 9/11. If I am right, then no war against terrorism can be effectively fought using the left-wing premises that are now accepted doctrine among mainstream liberals and Democrats.”

Whenever Muslims charge that the war on terror is really a war against Islam, Americans hasten to assure them they are wrong.  Yet as Dinesh D’Souza argues in this powerful and timely polemic, there really is a war against Islam.  Only this war is not being waged by Christian conservatives bent on a moral crusade to impose democracy abroad but by the American cultural left, which for years has been vigorously exporting its domestic war against religion and traditional morality to the rest of the world.

D’Souza contends that the cultural left is responsible for 9/11 in two ways: by fostering a decadent and depraved American culture that angers and repulses other societies—especially traditional and religious ones— and by promoting, at home and abroad, an anti-American attitude that blames America for all the problems of the world.

Islamic anti-Americanism is not merely a reaction to U.S. foreign policy but is also rooted in a revulsion against what Muslims perceive to be the atheism and moral depravity of American popular culture.  Muslims and other traditional people around the world allege that secular American values are being imposed on their societies and that these values undermine religious belief, weaken the traditional family, and corrupt the innocence of children. But it is not “America” that is doing this to them, it is the American cultural left. What traditional societies consider repulsive and immoral, the cultural left considers progressive and liberating.

Taking issue with those on the right who speak of a “clash of civilizations,” D’Souza argues that the war on terror is really a war for the hearts and minds of traditional Muslims—and traditional peoples everywhere.  The only way to win the struggle with radical Islam is to convince traditional Muslims that America is on their side.

We are accustomed to thinking of the war on terror and the culture war as two distinct and separate struggles. D’Souza shows that they are really one and the same.  Conservatives must recognize that the left is now allied with the Islamic radicals in a combined effort to defeat Bush’s war on terror. A whole new strategy is therefore needed to fight both wars.   “In order to defeat the Islamic radicals abroad,” D’Souza writes, “we must defeat the enemy at home.”

DINESH D’SOUZA, the Rishwain Research Scholar at the Hoover Institution at Stanford University, is the author of several bestselling books, including Illiberal Education, The Virtue of Prosperity, and What's So Great About America. He lives in Washington, D.C, and San Diego, California.