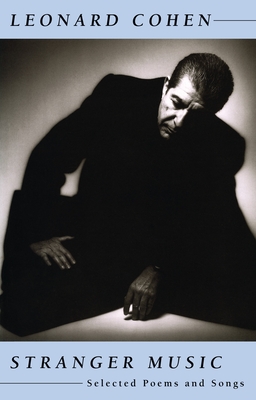 By Leonard Cohen
$25.00
This item is backordered and not currently available. Please contact us for an estimated availability date.

Stranger Music: Selected Poems and Songs celebrates the astonishing career of Leonard Cohen, revered around the world as one of the great visionaries, writers, performers, and most consistently daring songwriters.

Cohen’s career began in 1956 with the publication of Let Us Compare Mythologies, and he has since published mulitple books of poems—including The Spice-Box of Earth, Death of a Lady’s Man, and Book of Mercy—and has made numerous albums, becoming one of the most popular and influential artists in Canada, the United States, and Europe.

His first record, The Songs of Leonard Cohen, released in 1967, was a remarkable musical début and introduced some of his most famous songs, including “Suzanne,” “Hey, That’s No Way to Say Goodbye,” and “Sisters of Mercy.” From then, and with each subsequent album, he earned the status as one of the most dazzlingly literate songwriters of our time.

Stranger Music brings together for the first time a comprehensive selection of Leonard Cohen's song lyrics and his poetry, including some poems not previously published. This landmark edition demonstrates the range and depth of Cohen’s work, revealing an extraordinary gift of language that speaks with rare clarity, passion, and timelessness.

LEONARD COHEN's artistic career began in 1956 with the publication of his first book of poetry, Let Us Compare Mythologies. He published two novels, The Favourite Game and Beautiful Losers, and ten previous books of poetry, including Stranger Music: Selected Poems and Songs and Book of Longing. During a recording career that spanned almost fifty years, he released fourteen studio albums, the last of which, You Want It Darker, was released in 2016. Cohen was inducted into the Rock and Roll Hall of Fame in 2008, received a Grammy Lifetime Achievement Award in 2010, and was awarded the Prince of Asturias Award for Literature and the Glenn Gould Prize in 2011. He died on November 7, 2016.

“Stranger Music brings together, at last, the words of a Canadian artist who has been anything but a stranger to so many of us for so long. . . . Cohen has woven a chain of words that binds us together.” —Calgary Herald

“Stranger Music is a massive record of the poet’s imaginative journey through beauty, through horror, through the extremes of love and despair. . . . Cohen is always a poet of extremes: that’s where he lives, at the edges of them.” —Toronto Star

“Stranger Music is a record of Cohen’s dispatches from the front, an invaluable record of a shining voice. It burns still.” —Ottawa Citizen