Letters in a Bruised Cosmos (Paperback) 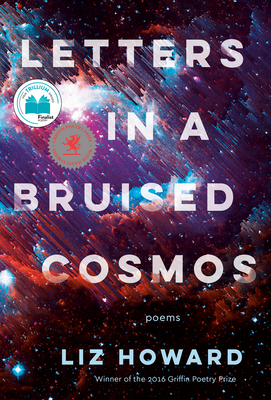 The latest from the author of the Griffin Poetry Prize Award-winning collection Infinite Citizen of the Shaking Tent.

I have to believe my account will outpace its ending.

The danger and necessity of living with each other is at the core of Liz Howard’s daring and intimate second collection. Letters in a Bruised Cosmos asks who do we become after the worst has happened? Invoking the knowledge histories of Western and Indigenous astrophysical science, Howard takes us on a breakneck river course of radiant and perilous survival in which we are invited to “reforge [ourselves] inside tomorrow’s humidex”. Everyday observation, family history, and personal tragedy are sublimated here in a propulsive verse that is relentlessly its own. Part autobiography, part philosophical puzzlement, part love song, Letters in a Bruised Cosmos is a book that once read will not soon be forgotten.

LIZ HOWARD’s debut collection Infinite Citizen of the Shaking Tent won the 2016 Griffin Poetry Prize, was shortlisted for the 2015 Governor General’s Award for poetry, and was named a Globe and Mail top 100 book. Her poetry has appeared in Canadian Art, The Fiddlehead, Poetry Magazine, and Best Canadian Poetry 2018. Howard received an Honours Bachelor of Science with High Distinction from the University of Toronto, and an MFA in Creative Writing from the University of Guelph. She is of mixed settler and Anishinaabe heritage. Born and raised on Treaty 9 territory in northern Ontario, she currently lives in Toronto.

Praise for Letters in a Bruised Cosmos and Liz Howard:

“Responding to astrophysical evidence of a potential collision between the known universe and a parallel universe, the poems in Liz Howard’s powerful collection trace this ‘cosmic bruise’ as it recurs like an epigenetic expression in family history, intergenerational trauma, and the phenomena of everyday life. Like dark matter in the bloodstream, or the star-shaped cells in the brain and spinal cord, the poet carries this vestige within her, observing its shape as a present absence in the spilled ashes of her Indigenous father, or in dissociative childhood experiences of abjection, or in meditations on cognition and Indigenous cosmology. The poems in Letters in a Bruised Cosmos are intimate, astonishing, and moving caresses of the bruise the past makes within and around us, marking the many ways in which ‘history is a sewing motion / along a thin membrane’.” —Judges' Citation, Griffin Poetry Prize

“Liz Howard’s Letters in a Bruised Cosmos stands as yet another masterpiece of orality and temporality in the blossoming oeuvre that is her poetic arena. We traverse through webbed histories, a multiplicity of singing bodies: human, non-human, father, lover, lake, land, galactic. Howard’s ability to unearth creation and trickster from beneath the rubble of canonic and catatonic poetics is a miracle in the making. It is no surprise to be met with yet again grace and fury in Letters in a Bruised Cosmos—as Howard has demonstrated time and time again, she is a divining starwalker of a poet.” —Joshua Whitehead, author of Jonny Appleseed

“In Letters in a Bruised Cosmos, Liz Howard makes sentences with the elegance and mystery of a sculptor. Howard’s aesthetic mode is a beautiful synthesis of feminist, anti-colonial, and post-structural traditions of critique and re-imagination that is singularly hers. I read each poem with the faith that I would land somewhere I couldn’t have known existed until I opened this book. That’s the mark of poetic genius. I loved this book with my whole body.” —Billy-Ray Belcourt, author of A History of My Brief Body

“Seeking abandon that is not abandonment, in an age when all ambient temperature seems bleak site of wind not warmth, these poems glow. Liz Howard’s cosmos is yes a difficult ongoingness, yet one that gifts bright with language. She creates poetry I can inhabit, touched by parents and their kilter of wildness, inheritor of caps and nail clippers, where spirit demeanours howl from streets and apartments in verbs from science and secular trees. If poetry’s red coals can’t help but expose life’s ashes, it’s in the light from stars. In Howard’s poems, visibility and viability enact an uncoded, recoded boreality, a DNA renewed. Here poems contain the possibility of all states of affairs. Even as the ‘natural’ of speech de-natures, grates, is rendered as remnant and ruin— with the poet we ‘pursue the future/ pulling dawn through/ through the needle/ point of compass north.’ Reading these poems, we are as rare and beautiful as Howard is, extending them to us.” —Erín Moure, author of The Elements