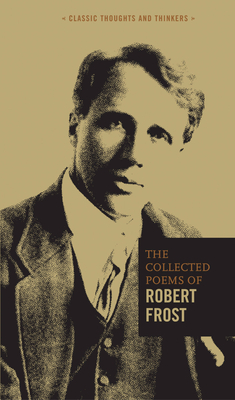 Likely one of the most well-known poets in American literary history, Robert Frost, born in California, lived much of his life in Massachusetts and New Hampshire, thus, his most popular poetry depicted subtle New England charm.

Frost’s style was largely free verse, though he did find a fair amount of structure in poetry could often be inspiring. Forever searching for 'the sound of sense,' Robert Frost's lyrical poetry is eloquent, precise, and robust. The Collected Poems of Robert Frost, includes the inspiring poetry of Frost's first three collections, including his earliest major poems "The Road Not Taken" and "Mending Wall" making this edition one you shouldn't miss!

In the series Classic Thoughts and Thinkers, explore some of the most influential texts of our time along with the inner workings of its greatest thinkers. With works from great American figures such as Theodore Roosevelt and Emily Dickinson and seminal documents including the Constitution of the Unites States, this series focuses on the most reflective and thought-provoking writings of the last two centuries. These beautiful hardcovers are the perfect historical perspective for meeting the challenges of the modern world.
​
Other titles in this series include: As a Man Thinketh, Autobiography of Benjamin Franklin, Common Sense, Constitution of the United States with the Declaration of Independence, Helen Keller, Narrative of the Life of Frederick Douglass, Selected Poems of Emily Dickinson, and Theodore Roosevelt’s Words of Wit and Wisdom.

Robert Lee Frost was born on March 26th 1874 in San Francisco, California and died on January 29th, 1963 in Boston, Massachusetts. He won the Pulitzer Prize for poetry and was bestowed a Congressional Gold Medal, "in recognition of his poetry, which enriched the culture of the United States and the philosophy of the world." On July 22, 1961 he was named Poet laureate of Vermont. His popularity is unmatched in the annals of American poetry; by the end of his life he had achieved the iconic status of "living legend."