1920: The Year of the Six Presidents (Paperback) 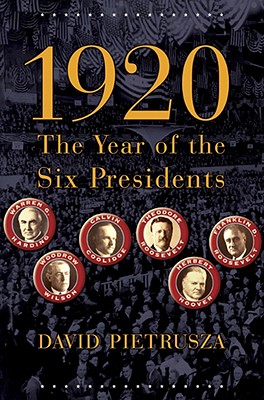 The presidential election of 1920 was one of the most dramatic ever. For the only time in the nation's history, six once-and-future presidents hoped to end up in the White House: Woodrow Wilson, Warren G. Harding, Calvin Coolidge, Franklin Delano Roosevelt, Herbert Hoover, and Theodore Roosevelt. It was an election that saw unprecedented levels of publicity -- the Republicans outspent the Democrats by 4 to 1 -- and it was the first to garner extensive newspaper and newsreel coverage. It was also the first election in which women could vote. Meanwhile, the 1920 census showed that America had become an urban nation -- automobiles, mass production, chain stores, and easy credit were transforming the economy and America was limbering up for the most spectacular decade of its history, the roaring '20s. Award-winning historian David Pietrusza's riveting new work presents a dazzling panorama of presidential personalities, ambitions, plots, and counterplots -- a picture of modern America at the crossroads.

David Pietrusza or edited over three dozen books. His Judge and Jury: The Life and Times of Judge Kenesaw Mountain Landis captured the 1998 CASEY Award. He was an editor of Total Baseball, the Official Encyclopedia of Major League Baseball. Pietrusza's more recent book, Ted Williams: My Life in Pictures, was written with Ted Williams. He lives in upstate New York.

"A hugely fascinating episode in American history, told with insight and great humor, by an author in command of his subject."—Kirkus Review, starred review

"A terrific and fun read."—Bloomberg Radio

"[A] campaign like no other before or since. David Pietrusza... builds the suspense of the 1920 campaign so effectively that the reader easily suspends, for the moment, knowledge of the outcome, as if it were still about to happen."—The Weekly Standard

"A colorful, nonacademic account.... Most of all, there are characters. Pietrusza draws them sharply: the imperious Wilson, the obliging Harding, the dour and honest Coolidge and the ambitious and dissembling Franklin Roosevelt. Fans of political history will enjoy this book."—Seattle Times

"An ably popular treatment that fans of campaign histories will enjoy."—Booklist

"More than just a story of six men who either already had been president or would be, this is the story of America as it moved into the modern age."—Denver Post

"A very vivid portrait of each of these presidents."—Ann Compton, ABC News

"In 1920: The Year of Six Presidents, writer David Pietrusza shows the right way to pull together disparate characters into a coherent narrative...this book portrays an America that has stopped looking backward and has begun to craft a new country and a new world role."—Washington Times