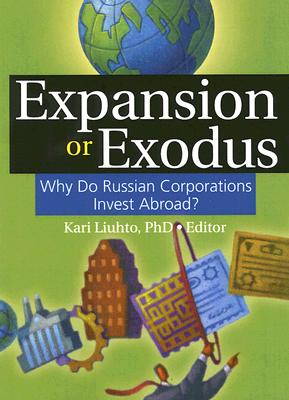 By Kari Liuhto (Editor)
$86.19
This item is backordered and not currently available. Please contact us for an estimated availability date.

Since the collapse of the former Soviet Union, tremendous changes have taken place in the Russian Federation's trade relationship with other countriesespecially with former allies. Expansion or Exodus examines how and why Russian corporations invest outside the country and why most of that money remains abroad as the growth and performance of these companies increases at an accelerated rate. As the Federation moves closer to joining the World Trade Organization, this timely book provides a global view of Russia's outward expansion, exploring the operations of Russian firms in old, new, and forthcoming European Union member states. Russian corporations have invested 50-70 billion USD abroad in the last five years, with global energy giant Gazprom leading the way. Although some of the Russian money has returned home, most of it remains abroad, largely in the EU and the United States. Many ex-socialist countries fear the Russian government is using its energy companies as foreign policy tools and in some cases, those fears have been grounded. But the outward expansion of Russian firms has become less motivated by politics as non-energy-related companies have begun their internationalization. Expansion or Exodus examines the vital issues surrounding Russia's outward foreign direct investments, including:

Expansion or Exodus is an invaluable resource for the international business community, policymakers, and academics.