The Boy Who Harnessed the Wind: Young Readers Edition (Hardcover) 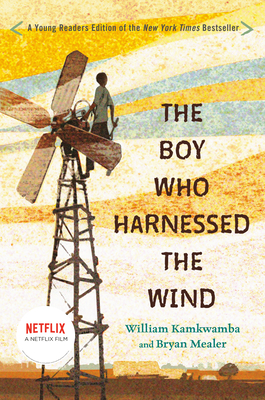 “The Boy Who Harnessed the Wind is wonderful on so many levels -- an introduction to village life in Malawi, a funny and inspiring memoir and, above all, a shining example of the capacity of books to change lives. I can't stop thinking and talking about it.”
— Mary Gleysteen, Eagle Harbor Book Company, Bainbridge Island, WA

“This is the heartwarming story of how one 14-year-old Malawian boy, unable to attend school, educated himself about electricity and learned how to make windmills. His accomplishment ended the cycle of drought and starvation-level poverty experienced by his family and the people in his rural village. I learned so much about the country of Malawi and a culture I knew little about. Great for book groups!”
— Linda, Beagle Books, Park Rapids, MN

Now a Netflix film starring and directed by Chiwetel Ejiofor, this is a gripping memoir of survival and perseverance about the heroic young inventor who brought electricity to his Malawian village.

When a terrible drought struck William Kamkwamba's tiny village in Malawi, his family lost all of the season's crops, leaving them with nothing to eat and nothing to sell. William began to explore science books in his village library, looking for a solution. There, he came up with the idea that would change his family's life forever: he could build a windmill. Made out of scrap metal and old bicycle parts, William's windmill brought electricity to his home and helped his family pump the water they needed to farm the land.

Retold for a younger audience, this exciting memoir shows how, even in a desperate situation, one boy's brilliant idea can light up the world. Complete with photographs, illustrations, and an epilogue that will bring readers up to date on William's story, this is the perfect edition to read and share with the whole family.

William Kamkwamba recently graduated from Dartmouth College. The original version of his memoir The Boy Who Harnessed the Wind was a New York Times Bestseller and a Publishers Weekly Best Book of the Year. He divides his time between Malawi and San Francisco, California.

Bryan Mealer is the author of Muck City and the New York Times bestseller The Boy Who Harnessed the Wind, which he wrote with William Kamkwamba. Since publication, the book has received many honors and has been translated into over a dozen languages. Mealer is also the author of All Things Must Fight to Live, which chronicled his years covering the war in the Democratic Republic of Congo for Harper's and the Associated Press. His forthcoming book, The Kings of Big Spring, a multi-generational saga about his family in West Texas, will be published by Flatiron Books in early 2018. He and his family live in Austin.

Praise for the Young Readers Edition:

* "This is a fascinating, well-told account that will intrigue curious minds . . . An inspiring, incredible story."—School Library Journal, starred review

* "Against astounding odds, Kamkwamba's eventual creation of a windmill to bring lighting to his family's home is nothing short of amazing. Compelling and informative for a broad readership and a good addition to STEM collections."—Kirkus Reviews

Praise for the original edition of The Boy Who Harnessed the Wind:

“William Kamkwamba’s achievements with wind energy should serve as a model of what one person, with an inspired idea, can do to tackle the crisis we face. His book tells a moving and exciting story.”—Al Gore, former Vice President and Nobel Laureate

“This is an amazing, inspiring and heartwarming story! It’s about harnessing the power not just of the wind, but of imagination and ingenuity. Those are the most important forces we have for saving our planet. William Kamkwamba is a hero for our age.”—Walter Isaacson, author of Einstein and Benjamin Franklin

“This book is inspirational. What William did took nothing more than initiative and a little learning, yet he changed his village and his life. There’s never been a better time to Do It Yourself, and I love how much we can learn from those who often have no other choice.”—Chris Anderson, editor in chief of Wired and author of Free and The Long Tail