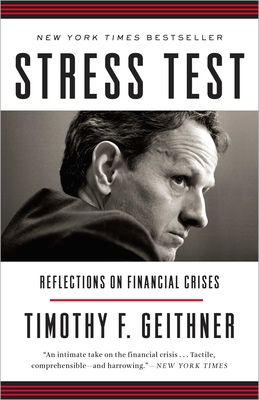 Stress Test is the story of Tim Geithner’s education in financial crises.

As president of the Federal Reserve Bank of New York and then as President Barack Obama’s secretary of the Treasury, Timothy F. Geithner helped the United States navigate the worst financial crisis since the Great Depression, from boom to bust to rescue to recovery. In a candid, riveting, and historically illuminating memoir, he takes readers behind the scenes of the crisis, explaining the hard choices and politically unpalatable decisions he made to repair a broken financial system and prevent the collapse of the Main Street economy. This is the inside story of how a small group of policy makers—in a thick fog of uncertainty, with unimaginably high stakes—helped avoid a second depression but lost the American people doing it. Stress Test is also a valuable guide to how governments can better manage financial crises, because this one won’t be the last.

Stress Test reveals a side of Secretary Geithner the public has never seen, starting with his childhood as an American abroad. He recounts his early days as a young Treasury official helping to fight the international financial crises of the 1990s, then describes what he saw, what he did, and what he missed at the New York Fed before the Wall Street boom went bust. He takes readers inside the room as the crisis began, intensified, and burned out of control, discussing the most controversial episodes of his tenures at the New York Fed and the Treasury, including the rescue of Bear Stearns; the harrowing weekend when Lehman Brothers failed; the searing crucible of the AIG rescue as well as the furor over the firm’s lavish bonuses; the battles inside the Obama administration over his widely criticized but ultimately successful plan to end the crisis; and the bracing fight for the most sweeping financial reforms in more than seventy years. Secretary Geithner also describes the aftershocks of the crisis, including the administration’s efforts to address high unemployment, a series of brutal political battles over deficits and debt, and the drama over Europe’s repeated flirtations with the economic abyss.

Secretary Geithner is not a politician, but he has things to say about politics—the silliness, the nastiness, the toll it took on his family. But in the end, Stress Test is a hopeful story about public service. In this revealing memoir, Tim Geithner explains how America withstood the ultimate stress test of its political and financial systems.

TIMOTHY F. GEITHNER was the seventy-fifth secretary of the U.S. Department of the Treasury and previously served as president and chief executive officer of the Federal Reserve Bank of New York. He wrote this book as a distinguished fellow at the Council on Foreign Relations.

A Financial Times Best Book of 2014

“He’s written a really good book — we might as well get that out of the way, as so much else about Timothy F. Geithner remains unsettled… There’s hardly a moment in Geithner’s story when the reader feels he is being anything but straightforward — a near-superhuman feat for someone who spent so much time in public life defending himself from careless and dishonest personal attacks. The decisions he made are easier to criticize than they are to improve upon. I doubt many readers will put his book down and think the man did anything but his best. On his feet he might have stammered and wavered. That in itself was always a sign he was unusually brave.” –Michael Lewis, New York Times Book Review

“An intimate take on the financial crisis… gripping… conveys in visceral terms just how precarious things were during the crisis, just how frightened many first responders were, and just what an achievement it was to avert a major depression… [Geithner] demonstrates that he can discuss economics in an accessible fashion, making the situation the country faced in 2008 and 2009 tactile, comprehensible—and harrowing—to the lay reader. Along the way, he also gives us a telling portrait of himself.” –New York Times

“A how-to manual for anyone faced with a financial crisis… Mr Geithner was known for his brutal candor, and as an author, he does not disappoint.” —The Economist

“A fascinating memoir about life in the maelstrom of the financial crisis… Earlier books have described much of what happened that September, but Geithner was present for all the frantic meetings, the thousands of phone calls — and in the case of Lehman, the failure to find a buyer that could keep it alive. New problems cropped up almost weekly, if not daily. He explains each in easy-to-understand language and what the issues were that shaped the responses… There could be another crisis someday, of course, but what Geithner and his colleagues did has made one far less likely.” –USA Today

“Geithner does an admirable job of explaining the origins and complexities of the crisis for the average person. But there’s enough detail and retrospective lessons-learned to make it valuable for students of financial history….fast-paced and colorful….Stress Test goes beyond other crisis books.” –Los Angeles Times

“Throughout Stress Test, one gains a deep appreciation for the heart-pumping decisions made by Geithner and his colleagues from 2007 through 2012. And he makes a compelling case that overhwelming force is necessary in crisis, and that the measures taken by the Fed and two successive administrations prevented even more pain for ordinary Americans.” –WashingtonPost.com

“An unsparing insider’s account of the financial crisis from the former Secretary of the Treasury, unpacking the hard decisions and terrible trade-offs that devastated the economy but staved off a deep, lasting depression.” —TIME.com

“The central irony of Stress Test, the new memoir by former U.S. Treasury Secretary Tim Geithner, is that a guy who was accused of being a lousy communicator while in office has penned a book that is such a good read…I’ve now read four or five of these first drafts of the history of the Great Recession, and I believe Stress Test represents the biggest contribution of the bunch.” —Bill Gates

“Sensational . . . Tim’s book will forever be the definitive work on what causes financial panics and what must be done to stem them when they occur.” —Warren Buffett

“Very few important subjects in American history have been the subject of as much disinformation and deliberate distortion as the events surrounding the financial crisis that broke in 2008. Tim Geithner’s candid, clear-headed, and refreshingly self-effacing account of his role in formulating the federal government’s response is a very welcome antidote. Geithner’s book is a triple threat: it is first-rate economic history, insightful political science, and, most important, a cogent exposition of the importance of adhering to the policies adopted in the aftermath of the crisis if we are to succeed in diminishing the likelihood of any recurrence.” —Barney Frank

“Stress Test is an absolutely compelling account of the financial crisis, written in a clear, graceful style with striking honesty at every step along the way. Timothy Geithner brings a complex story to life with telling anecdotes and personal reflections.” —Doris Kearns Goodwin

“This is a lucid, fascinating, and extremely important book. Every American should read it. Geithner does something unusual: he engages in substance. With both insight and humility, plus a good dose of wry humor, he explains what really happened during the financial crisis. No matter your political persuasion, you will find this book educational, enlightening, and interesting.” —Walter Isaacson

“The country owes Tim Geithner great appreciation for his role in overcoming the financial crisis of 2008.  He has now indebted it further with writing a thoughtful, very readable and informative account of the conduct of policy at the edge of disaster.” —Henry A. Kissinger