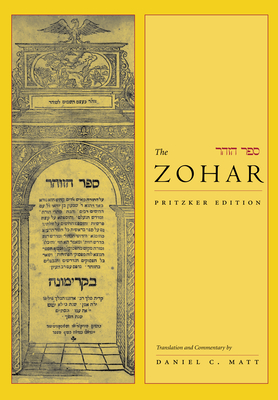 This is book number 1 in the Zohar: Pritzker Edition series.

The first two volumes of The Zohar: Pritzker Edition, translated with commentary by Daniel C. Matt, cover more than half of the Zohar's commentary on the Book of Genesis (through Genesis 32:3). This is the first translation ever made from a critical Aramaic text of the Zohar, which has been established by Professor Matt based on a wide range of original manuscripts. The extensive commentary, appearing at the bottom of each page, clarifies the kabbalistic symbolism and terminology, and cites sources and parallels from biblical, rabbinic, and kabbalistic texts. The translator's introduction is accompanied by a second introduction written by Arthur Green, discussing the origin and significance of the Zohar. Please see the Zohar Home Page for ancillary materials, including the publication schedule, press release, Aramaic text, questions, and answers.

Further information on the Zohar:

Sefer ha-Zohar, The Book of Radiance, has amazed and overwhelmed readers ever since it emerged mysteriously in medieval Spain toward the end of the thirteenth century. Written in a unique Aramaic, this masterpiece of Kabbalah exceeds the dimensions of a normal book; it is virtually a body of literature, comprising over twenty discrete sections. The bulk of the Zohar consists of a running commentary on the Torah, from Genesis through Deuteronomy. This translation begins and focuses here in what are projected to be ten volumes. Two subsequent volumes will cover other, shorter sections.

The Zohar's commentary is composed in the form of a mystical novel. The hero is Rabbi Shim'on son of Yohai, a saintly disciple of Rabbi Akiva who lived in the second century in the land of Israel. In the Zohar, Rabbi Shim'on and his companions wander through the hills of Galilee, discovering and sharing secrets of Torah.

On one level, biblical figures such as Abraham and Sarah are the main characters, and the mystical companions interpret their words, actions, and personalities. On a deeper level, the text of the Bible is simply the starting point, a springboard for the imagination. For example, when God commands Abraham, Lekh lekha, Go forth... to the land that I will show you (Genesis 12:1), Rabbi El'azar ignores idiomatic usage and insists on reading the words more literally than they were intended, hyperliterally: Lekh lekha, Go to yourself Search deep within to discover your true self.

At times, the companions themselves become the main characters, and we read about their dramatic mystical sessions with Rabbi Shim'on or their adventures on the road, for example, an encounter with a cantankerous old donkey driver who turns out to be a master of wisdom in disguise.

Ultimately, the plot of the Zohar focuses on the ten sefirot, the various stages of God's inner life, aspects of divine personality, both feminine and masculine. By penetrating the literal surface of the Torah, the mystical commentators transform the biblical narrative into a biography of God. The entire Torah is read as one continuous divine name, expressing divine being. Even a seemingly insignificant verse can reveal the inner dynamics of the sefirot--how God feels, responds and acts, how She and He (the divine feminine and masculine) relate intimately with each other and with the world.

Daniel C. Matt is a leading authority on Jewish mysticism. For over twenty years, he served as Professor of Jewish Spirituality at the Graduate Theological Union in Berkeley, California. He has also taught at Stanford University and the Hebrew University in Jerusalem. He has published six books, including: The Zohar: Pritzker Edition, Volume One and The Zohar: Pritzker Edition, Volume Two Zohar: The Book of Enlightenment; Zohar: Annotated and Explained; The Essential Kabbalah; and God and the Big Bang: Discovering Harmony between Science and Spirituality. He has spent the past four years in Jerusalem working on this translation and currently lives in Berkeley, California.

"[Matt's] text is the most authoritative English translation and the only English edition that goes directly to the source, unearthing many of the major surviving manuscripts of the original language."—Library Journal

"Daniel Matt's translation of, and commentary to, the Zohar is a powerfully poetic rendition of this spiritual masterpiece. It is a book to be studied, not read. As one who has pondered and taught the Zohar for many years, I found Matt's interpretation learned, insightful, and very beautiful. Often, his translation and commentary changed my understanding of passages I thought I had already mastered."—David R. Blumenthal, Journal of the American Academy of Religion

"Pinchas of Koretz once said that the Zohar saved his soul, and a great many other Jews down through the centuries would agree. The Zohar was considered by many pious Jews to be part of the holy triad by which they lived: the Bible, the Talmud, and the Zohar. And so it is good to have it accesible to a new generation of Jews, who will learn much from it, if they are willing to confront it, to wrestle with it, and to engage in the study of it with mind and soul."—Rabbi Jack Riemer

"At last, we have an authoritative version of one of the most significant, misunderstood, brilliant, difficult texts in the whole of the Jewish tradition, a translation that fulfills the wishes and scholars and seekers alike."—The Forward

"...Thanks to Matt's achievement the English reader is able, for the first time, to appreciate the depth and complexity of this innovative and, at the same time, canonical mystical text."—Journal of Jewish Studies