The Rebbe's Army: Inside the World of Chabad-Lubavitch (Paperback) 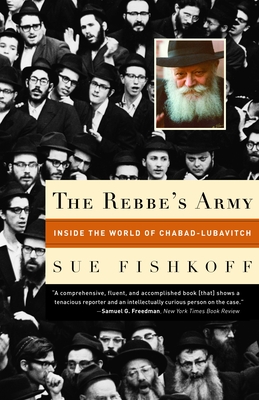 “Excuse me, are you Jewish?” With these words, the relentlessly cheerful, ideologically driven emissaries of Chabad-Lubavitch approach perfect strangers on street corners throughout the world in their ongoing efforts to persuade their fellow Jews to live religiously observant lives. In The Rebbe’s Army, award-winning journalist Sue Fishkoff gives us the first behind-the-scenes look at this small Brooklyn-based group of Hasidim and the extraordinary lengths to which they take their mission of outreach.

They seem to be everywhere—in big cities, small towns, and suburbs throughout the United States, and in sixty-one countries around the world. They light giant Chanukah menorahs in public squares, run “Chabad houses” on college campuses from Berkeley to Cambridge, give weekly bible classes in the Capitol basement
in Washington, D.C., run a nonsectarian drug treatment center in Los Angeles, sponsor the world’s biggest Passover Seder in Nepal, establish synagogues, Hebrew schools, and day-care centers in places that are often indifferent and occasionally hostile to their outreach efforts. They have built a billion-dollar international empire, with their own news service, publishing house, and hundreds of Websites.

Who are these people? How successful are they in making Jews more observant? What influence does their late Rebbe, Menachem Mendel Schneerson (who some thought was the Messiah), continue to have on his followers? Fishkoff spent a year interviewing Lubavitch emissaries from Anchorage to Miami and has written an engaging and fair-minded account of a Hasidic group whose motives and methodology continue to be the subject of speculation and controversy.

Sue Fishkoff is the associate editor of a weekly newspaper in Monterey County, California, and a regular contributor to The Jerusalem Post and Moment, among other publications. She has received journalism awards from the National Newspaper Association, the B’nai B’rith World Center, and the American Jewish Press Association. She lives in Pacific Grove, California.

"Rich in telling anecdotes and thumbnail portraits, Fishkoff's narrative is infused with the sense of joy radiated by her subjects.... For both the serious and casual observer of Jewish life, this is valuable reading." --Sandee Brawarsky, The Jewish Week

"The Rebbe's Army shows a tenacious reporter and an intellectually curious person on the case. Fishkoff has brought the scattered shlichim indelibly together on the page." --Samuel G. Freedman, New York Times Book Review

"With a critical but appreciative eye, Sue Fishkoff explains why so many secular people have such a warm spot in their hearts for the Chabad movement, and especially for its army of “shaliachs.”  A wonderful book about a fascinating group of people.  We can learn much both from the book and from the emissaries about whom she writes." --Alan Dershowitz

"The Rebbe's Army is a fascinating account of the Chabad movement and its emissaries. I read it with interest and recommend it highly." --Jon Voight

"The Rebbe's Army is an accurate, detailed portrait of the outreach efforts of Chabad, which has become a major movement in American Judaism. Fishkoff intimately chronicles the life and work of the husband-and-wife emissaries of the late Rebbe: specifically, their efforts to revive Jewish commitment throughout the world. She reveals their inner struggles--even crises--and brings to life the unbelievable sacrifices they make. While painting a sympathetic picture, she manages to capture accurately the tensions within the movement, the variety of reactions to it within the wider Jewish community, and the difficulties engendered by the Rebbe's passing, which Chabad is still working to overcome." -- Lawrence H. Schiffman, Chair, Skirball Department of Hebrew and Judaic Studies, New York University

"Fishkoff's account of the lives of the thousands of emissaries of the late Lubavitcher Rebbe is reportage of the highest order. We are given the facts about this Jewish monastic-missionary movement but, more important, we are taken into the inner lives and commitments of its emissaries. Fishkoff makes us see and understand these passionate, caring, and loving people." --Arthur Hertzberg, author of A Jew in America: My Life and a People's Struggle for Identity

"Sue Fishkoff has provided a clear view of Lubavitcher Hasidim that will explain their mysterious attraction to many who have encountered them.  The Rebbe's Army resonates with the wonder and fascination that have marked the meetings between the marginally Jewish and these emissaries of the charismatic rabbi from Brooklyn.  For those who want to see what the appeal of Lubavitcher life is, and what makes these Hasidim so dedicated to their mission, this book is a good place to start." --Samuel Heilman, Professor of Jewish Studies and Sociology, CUNY, and author of Defenders of the Faith: Inside Ultra-Orthodox Jewry