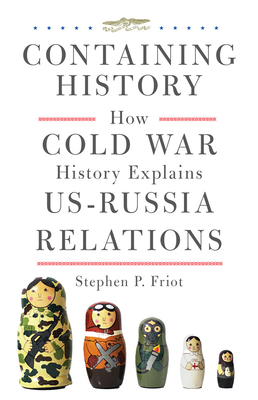 In the wake of Russia's invasion of Ukraine in February 2022, with U.S.-Russia relations approaching a breaking point, this book provides a key to understanding how we got here. Specifically, Stephen P. Friot asks, how do Russians and Americans think about each other, and why do they see the world so differently? The answers, Friot suggests, lie in the historical events surrounding the Cold War and their divergent influence on politics and popular consciousness. Cross-disciplinary and cross-cultural in its scope, Containing History employs the tools and insights of history, political science, and international relations to explain how twenty-first-century public attitudes in Russia are the product of a thousand years of history, including searing experiences in the twentieth century that have no counterparts in U.S. history. At the same time, Friot explores how--in ways incomprehensible to Russians--U.S. politics are driven by American society's ethnic and religious diversity and by the robust political competition that often, for better or worse, puts international issues to work in the service of domestic political gain. Looking at history, culture, and politics in both the United States and Russia, Friot shows how the forty-five years of the Cold War and the seventy years of the Soviet era have shaped both the Russia we know in the twenty-first century and American attitudes toward Russia--in ways that drive social and political behavior, with profound consequences for the post-Cold War world. Amid the wreckage of the high hopes that accompanied the end of the Cold War, and as faith in a rules-based international order wanes, Friot's work provides a historical, cultural, and political framework for understanding the geopolitics of the moment and, arguably, for navigating a way forward.