Owls and Other Fantasies: Poems and Essays (Paperback) 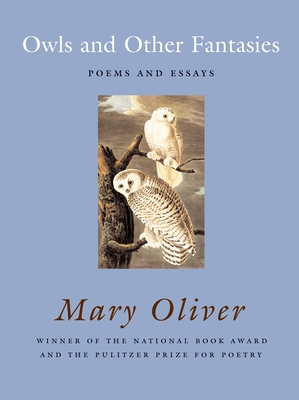 A perfect introduction to Mary Oliver’s poetry, this stunning collection features 26 nature poems and prose writings about the birds that played such an important role in the Pulitzer Prize winner’s life.

Within these pages you will find hawks, hummingbirds, and herons; kingfishers, catbirds, and crows; swans, swallows and, of course, the snowy owl, among a dozen others-including ten poems that have never before been collected. She adds two beautifully crafted essays, “Owls,” selected for the Best American Essays series, and “Bird,” a new essay that will surely take its place among the classics of the genre.

In the words of the poet Stanley Kunitz, “Mary Oliver's poetry is fine and deep; it reads like a blessing. Her special gift is to connect us with our sources in the natural world, its beauties and terrors and mysteries and consolations.”

For anyone who values poetry and essays, for anyone who cares about birds, Owls and Other Fantasies will be a treasured gift; for those who love both, it will be essential reading.

A private person by nature, Mary Oliver (1935–2019) gave very few interviews over the years. Instead, she preferred to let her work speak for itself. And speak it has, for the past five decades, to countless readers. The New York Times recently acknowledged Mary Oliver as “far and away, this country’s best-selling poet.”

Born in a small town in Ohio, Oliver published her first book of poetry in 1963 at the age of 28; No Voyage and Other Poems, originally printed in the UK by Dent Press, was reissued in the United States in 1965 by Houghton Mifflin. Oliver has since published twenty books of poetry and six books of prose. As a young woman, Oliver studied at Ohio State University and Vassar College, but took no degree. She lived for several years at the home of Edna St. Vincent Millay in upper New York state, companion to the poet’s sister Norma Millay. It was there, in the late ’50s, that she met photographer Molly Malone Cook. For more than forty years, Cook and Oliver made their home together, largely in Provincetown, Massachusetts, where they lived until Cook’s death in 2005.

Over the course of her long and illustrious career, Oliver received numerous awards. Her fourth book, American Primitive, won the Pulitzer Prize for Poetry in 1984. Oliver’s books on the craft of poetry, A Poetry Handbook and Rules for the Dance, are used widely in writing programs, and she led workshops, and held residencies, at various colleges and universities. She passed away in January 2019 at the age of 83.

“Mary Oliver is beautiful and accurate in this book of poetry and prose about birds . . . all rendered with the precision of a line-drawing of a single feather that puts the entire wing into perspective.”
—Orion

“What we have here are moral essays in prose and verse, passionate meditations on the conduct of life. You will be the wiser—as I believe I am—for having read them.”
—Frank Wilson, Philadelphia Inquirer

“These poems and essays dazzle us and then send us into deep reflection about the marvels and mysteries of life that come to us in the sightings, songs, and soaring of birds.”
—Frederic and Mary Ann Brussat, Spirituality and Health

“Owls and Other Fantasies will bring much pleasure to the many readers who claim Oliver as their favorite poet, as well as to people new to her work.”
—Judy Clarence, Booklist

“[Owls and Other Fantasies] will bring much pleasure to the many readers who claim Oliver as their favorite poet, as well as to people new to her work.:
—Library Journal