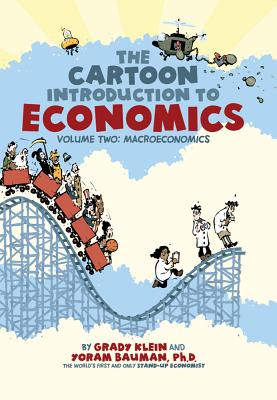 Need to understand today's economy? This is the book for you. The Cartoon Introduction to Economics, Volume Two: Macroeconomics is the most accessible, intelligible, and humorous introduction to unemployment, inflation, and debt you'll ever read.

Whereas Volume One: Microeconomics dealt with the optimizing individual, Volume Two: Macroeconomics explains the factors that affect the economy of an entire country, and indeed the planet. It explores the two big concerns of macroeconomics: how economies grow and why economies collapse. It illustrates the basics of the labor market and explains what the GDP is and what it measures, as well as the influence of government, trade, and technology on the economy. Along the way, it covers the economics of global poverty, climate change, and the business cycle. In short, if any of these topics have cropped up in a news story and caused you to wish you grasped the underlying basics, buy this book.

An environmental economist at the University of Washington (and a part-time teacher at Seattle’s Lakeside High School), Yoram Bauman, PhD, is the world’s first and only stand-up economist.

“The major concepts of macroeconomics are broken down with wit, verve, and clarity in this excellent follow-up to The Cartoon Introduction to Economics: Vol. 1: Microeconomics . . . This clever, lucid, and lighthearted book is a godsend to anyone who needs a simple but complete primer on the ins and outs of economics.” —Publishers Weekly

“People don't usually chuckle over unemployment, inflation, and recessions. But they'll get plenty of laughs out of this book--and a good introduction to macro too.” —Eric Maskin, Nobel Laureate in Economics

“If you don't want to cry about the state of the economy, why not laugh instead? This book is an ideal introduction to macroeconomics for anybody who thinks they ought to understand what's happening around them but is put off by dense text and economics jargon.” —Diane Coyle, author of The Economics of Enough

“Bauman [has] an insightful philosophical bent and the natural inclinations of an educator, in the best sense of that term.” —MarginalRevolution.com