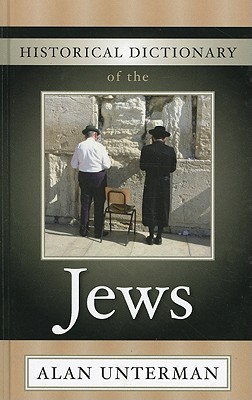 By Alan Unterman
This item is backordered and not currently available. Please contact us for an estimated availability date.

The Historical Dictionary of the Jews presents the history of the Jewish people and their religious culture in a way that makes clear how and why this small, ancient people have survived nearly four millennia and managed to play such an important role in the world-well out of proportion to their population. The Jews trace their origins far back in history to the early tribes of Judah and Moses. Over the centuries, they spread across much of the Western world, as well as into parts of Africa and Asia, until they were crushed by the Holocaust and were forced to find refuge in the United States and the new state of Israel. Because of that horrific event, of the estimated 15 million Jews living today, approximately six million reside in Israel, with almost the same number living in the United States, making these two countries the main center of Jewish life today. This ready reference tells the history of the Jewish people through a detailed chronology, an introductory essay, an extensive bibliography, and over 200 cross-referenced dictionary entries on significant persons, places, events, institutions, and aspects of culture, society, economy, and politics. This book is an excellent access point for students, researchers, and anyone wanting to know more about the Jewish people.

Alan Unterman is currently retired from a career as a lecturer in Comparative Religion, mostly at the University of Manchester, United Kingdom, and as the Minister of an Orthodox Synagogue in Manchester.