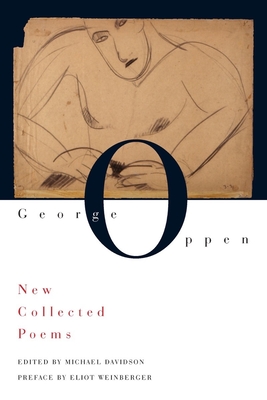 “Michael Davidson has done a masterful job of editing this new edition of the Collected Poems.... Few poets significantly alter and enhance the state of the art. Oppen is one of them.”—Michael Palmer, Bookforum

George Oppen’s New Collected Poems gathers in one volume all of the poet’s books published in his lifetime (1908–84), as well as his previously uncollected poems and a selection of his unpublished work. Oppen, whose writing was championed by Ezra Pound when it was first published by The Objectivist Press in the 1930s, has become one of America’s most admired poets. In 1969 he won a Pulitzer Prize for his collection Of Being Numerous, which The New Yorker recently said is “unmatched by any book of American poetry since.” The New Collected Poems is edited by Michael Davidson of the University of California at San Diego, who also writes an introduction about the poet’s life and work and supplies generous notes that will give interested readers an understanding of the background of the individual books as well as keys to references in the poems. The award-winning essayist and translator Eliot Weinberger offers a personal remembrance of the poet in his preface, “Oppen Then.” This newly revised paperback edition also includes a generous CD of the poet reading from each of his poetry collections.

GEORGE OPPEN (1908–1984) was born in New Rochelle, New York. Often associated with the Objectivists, Oppen abandoned poetry in the 1930s for political activism, and later moved to Mexico to avoid the House Un-American Activities Committee. He returned to poetry—and to the United States—in 1958 and received a Pulitzer Prize for his work in 1969.

Eliot Weinberger is an essayist, editor, and translator. He lives in New York City.

A first rate edition of Oppen's poetry. His poetry serves as a model of modernist ethics as well as aesthetics.
— William Doreski - Harvard Review

He again and again earns the reader's admiration, again and again directs us towards unexpected linguistic and sensory insights.
— Marta Figlerowicz - The Harvard Book Review

Oppen’s respect for the act of making, no matter how small, is at every moment palpable, and it infuses his work with sweetness that makes difficulty feel like life’s reward.
— James Longenbach - The Yale Review