The Collected Poems of Dylan Thomas: The Original Edition (Paperback) 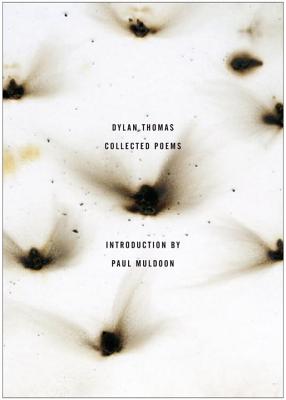 The original and classic The Collected Poems of Dylan Thomas is available once again, now with a brilliant new preface by Paul Muldoon.

The Collected Poems of Dylan Thomas contains poems that Thomas personally decided best represented his work. A year before its publication Thomas died from swelling of the brain triggered by excessive drinking. (A piece of New Directions history: it was our founder James Laughlin who identified Thomas’ body at the morgue of St. Vincent’s Hospital.)

Since its initial publication in 1953, this book has become the definitive edition of the poet’s work. Thomas wrote “Prologue” addressed to “my readers, the strangers” — an introduction in verse that was the last poem he would ever write. Also included are classics such as “And Death Shall Have No Dominion,” “Do Not Go Gentle into that Good Night,” and “Fern Hill” that have influenced generations of artists from Bob Dylan (who changed his last name from Zimmerman in honor of the poet), to John Lennon (The Beatles included Thomas’ portrait on the cover of Sgt. Pepper’s Lonely Hearts Club Band); this collection even appears in the film adaptation of Cormac McCarthy’s The Road when it is retrieved from the rubble of a bookshelf.

And death shall have no dominion.

Dead men naked they shall be one

With the man in the wind and the west moon;

When their bones are picked clean and their clean bones gone,

They shall have stars at elbow and foot;

Though they go mad they shall be sane,

Though they sink through the sea they shall rise again,

Though lovers be lost love shall not:

And death shall have no dominion.

(From “And Death Shall Have No Dominion”)

Dylan Thomas, born in Swansea in 1914, is perhaps Wales' best-known writer, widely considered to be one of the major poets of the 20th century, and many of his greatest poems, such as 'Fern Hill' and 'Do not go gentle into that good night' remain among the nation's favorites. As well as poetry, Dylan Thomas wrote numerous short stories and scripts for film and radio - none more popular than his radio play UNDER MILK WOOD (ISBN 9780811229937), which is considered by many to be his masterpiece. He led a fascinating and tempestuous life, permeated by love affairs and reckless bouts of drinking, which led him to claim that he had beast, angel and madman within him. There have been several film adaptations of his fascinating life, which ended all too soon in 1953 when he collapsed and died in New York shortly after his 39th birthday. A memorial stone commemorating his life and work was unveiled in Poets' Corner in Westminster Abbey in 1982.

Paul Muldoon is the author of numerous volumes of poetry, including, most recently, The Word on the Street. He is the poetry editor of The New Yorker and the Howard G. B. Clark '21 Professor in the Humanities at Princeton University. His awards include the Pulitzer Prize for Poetry and the T. S. Eliot Prize.

[It is] the work Thomas himself had considered most representative of his voice as a poet and, now, of his legacy — a legacy that has continued to influence generations of writers, artists, and creative mavericks: Bob Dylan changed his last name from Zimmerman in an homage to the poet, The Beatles drew his likeness onto the cover of Sgt. Pepper’s Lonely Hearts Club Band, and Christopher Nolan made “Do not go gentle into that good night” a narrative centerpiece of his film Interstellar.

Thomas meant much to me and my generation, he is still singing in his chains like the sea—a force driving the flowers.
— Seamus Heaney