The Black Seminoles: History of a Freedom-Seeking People (Paperback) 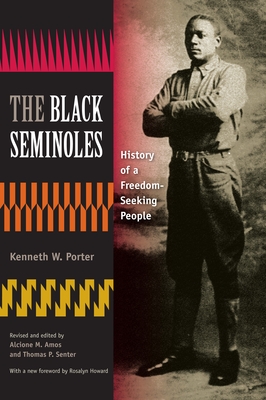 "A powerful and stirring story."--San Antonio Express-News "An epic tale of desperate, unwitting fugitives who would--without exaggeration--defeat armed forces both white and Indian, make possible settlement of the West, earn the country's highest military honors, and have nothing to show for it."--Miami Herald "This fascinating story chronicles the lives of fugitive slaves who aligned themselves with Seminole Indians in Florida beginning in the early 1800s, fought with them in the Second Seminole War, and were removed, along with them to Indian Territory, where they struggled to remain free. To prevent reenslavement, their remarkable leader, John Horse, led much of the group to Mexico. . . . Recommended."--Library Journal "Porter spoke directly with Chief Horse's descendants and with older black Seminoles who either knew him or had heard first-hand stories about him. . . . A gripping account of a people's struggle both for identity and freedom."--Naples Daily News "This book's sweep is broad, its story is provocative, and the human saga it evokes is compelling. No exercise in political correctness, this is a detailed, factual account of a remarkable people's struggle for survival over multiple generations and in the face of calamitous challenges. This history will surprise, while it intrigues. Kenneth Porter has made an enduring contribution, for which we are indebted to him."--Tampa Tribune

Kenneth W. Porter, former professor of history at the University of Oregon, began researching Black Seminole history in the 1930s. When he died in 1981, he was still editing the 700 pages of his life's work. Originally published in 1996, his book remains the definitive work on the subject.