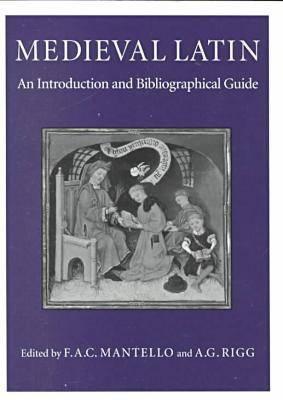 By F. a. C. Mantello (Editor), A. G. Rigg (Editor)
$51.69
This item is backordered and not currently available. Please contact us for an estimated availability date.

Organized with the assistance of an international advisory committee of medievalists from several disciplines, Medieval Latin: An Introduction and Bibliographical Guide is a new standard guide to the Latin language and literature of the period from c. A.D. 200 to 1500. It promises to be indispensable as a handbook in university courses in Medieval Latin and as a point of departure for the study of Latin texts and documents in any of the fields of medieval studies.

Comprehensive in scope, the guide provides introductions to, and bibliographic orientations in, all the main areas of Medieval Latin language, literature, and scholarship. Part One consists of an introduction and sizable listing of general print and electronic reference and research tools. Part Two focuses on issues of language, with introductions to such topics as Biblical and Christian Latin, and Medieval Latin pronunciation, orthography, morphology and syntax, word formation and lexicography, metrics, prose styles, and so on. There are chapters on the Latin used in administration, law, music, commerce, the liturgy, theology and philosophy, science and technology, and daily life. Part Three offers a systematic overview of Medieval Latin literature, with introductions to a wide range of genres and to translations from and into Latin. Each chapter concludes with a bibliography of fundamental works--texts, lexica, studies, and research aids.

This guide satisfies a long-standing need for a reference tool in English that focuses on medieval latinity in all its specialized aspects. It will be welcomed by students, teachers, professional latinists, medievalists, humanists, and general readers interested in the role of Latin as the learned lingua franca of western Europe. It may also prove valuable to reference librarians assembling collections concerned with Latin authors and texts of the postclassical period.

"This extraordinary volume, joint effort of dozens of scholars in eight countries, will be in constant use for research, for advising students and designing courses, and for answering the queries of nonmedievalist colleagues. . . . Medieval Latin provides a foundation for advances in research and teaching on a wide front. . . . Though Mantello and Rigg's Medieval Latin is a superb reference volume, I recommend that it also be read from beginning to end--in small increments, of course. The rewards will be sheaves of notes and an immensely enriched appreciation of Medieval Latin and its literature."--Janet M. Martin, Princeton University, Speculum

"A remarkable achievement, and no one interested in medieval Latin can afford to be without it."--Journal of Ecclesiastical History

"Everywhere there is clarity, conclusion, judicious illustration, and careful selection of what is central. This guide is a major achievement and will serve Medieval Latin studies extremely well for the foreseeable future."--The Classical Review