Canonical Collections of the Early Middle Ages (Ca. 400-1400): A Bibliographical Guide to the Manuscripts and Literature (History of Medieval Canon Law) (Paperback) 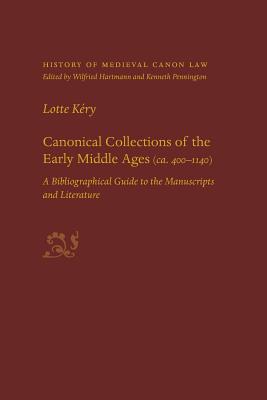 In this first volume of the new History of Medieval Canon Law series, Lotte K ry presents a bibliographical survey of the chronological and systematic canonical collections in the Latin West from the beginnings of Christianity to Gratian's Decretum (ca. a.d. 1140). Divided into three large chronological periods-Early Medieval, Carolingian, and Gregorian Reform-the book includes a catalogue of early medieval canonistic manuscripts and valuable information about them. For each collection, K ry has described its type and contents, the time and place of compilation, and when possible, its author. In addition, full bibliographies have been provided for each collection.


Lotte K ry is an historian at the Leopold-Wenger-Institut in Munich.


"This book will be an essential reference tool for scholars in this area of study."--American Reference Books Annual


This new series brings together a group of distinguished scholars to present a unified history of medieval canon law from the earliest time to 1500. During the last century, legal historians discovered that medieval canon law influenced almost all parts of medieval and early modern life and thought. It attracted some of the best minds of the period, thereby creating a jurisprudence of great sophistication. By combining the history of canon law with the history of the law's influence and impact on the Church, the authors have produced a groundbreaking work of scholarship that will interest a wide audience and, at the same time, be a valuable tool of reference.

"This is the first volume to appear in the long-awaited History of Medieval Canon Law, edited by Wilfried Hartmann and Kenneth Pennington. It is a piece of meticulous research, which bodes very well indeed for the ten volumes still to come. . . . It will be of use to scholars of the medieval period in general, identifying major collections of canonical material intended for ecclesiastical use; but it will also serve as a guide to the authors of the subsequent studies in the series, enabling them to 'dispense with similar lists' in their own works. . . . Its value to the medieval historian is all the greater because of the vast secondary material provided for individual collections or canonists. . . . This is an impressive bibliographical tool, whose usefulness will extend far beyond the purpose for which it was produced."--The Heythrop Journal

"An invaluable bibliographical guide, listing all the substantial collections before Gratian known to modern scholarship with an indication of the history of their publication, and of the widely scattered studies in which the essential material for their understanding is to be found."--Journal of Ecclesiastical History

"A superb guide to Latin canon law collections produced before the year 140. . . . For the more seasoned explorers of canon law, and for diligent neophytes alike, Kery's book is an invaluable guide. . . . Kery and her collaborators have created an indispensable guide to the study of medieval canon law collections."--Speculum

"An exemplary work of metascholarship, a comprehensive presentation of manuscript information derived from hundreds of books and articles written by European and American scholars over the last century. The information is well-presented: controversial issues under the various rubrics are supported with the evidence and citations to the bibliography. . . . For scholars working in medieval canon law before Gratian, this will be an indispensable work."--The Medieval Review

" Kery's work . . . is the result of such prodigious scholarship, such indefatigable patience, and such painstaking compilation that it serves as a comprehensive guide both to what has been do.