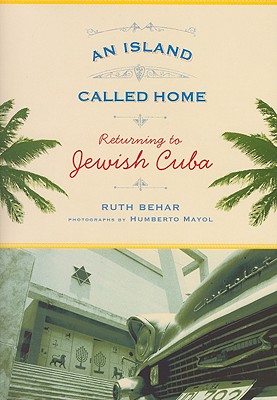 By Ruth Behar, Humberto Mayol (By (photographer))
$39.04
This item is backordered. Please contact us for an estimated availability date.

Yiddish-speaking Jews thought Cuba was supposed to be a mere layover on the journey to the United States when they arrived in the island country in the 1920s. They even called it “Hotel Cuba.” But then the years passed, and the many Jews who came there from Turkey, Poland, and war-torn Europe stayed in Cuba. The beloved island ceased to be a hotel, and Cuba eventually became “home.” But after Fidel Castro came to power in 1959, the majority of the Jews opposed his communist regime and left in a mass exodus. Though they remade their lives in the United States, they mourned the loss of the Jewish community they had built on the island.

As a child of five, Ruth Behar was caught up in the Jewish exodus from Cuba. Growing up in the United States, she wondered about the Jews who stayed behind. Who were they and why had they stayed? What traces were left of the Jewish presence, of the cemeteries, synagogues, and Torahs? Who was taking care of this legacy? What Jewish memories had managed to survive the years of revolutionary atheism?

An Island Called Home is the story of Behar’s journey back to the island to find answers to these questions. Unlike the exotic image projected by the American media, Behar uncovers a side of Cuban Jews that is poignant and personal. Her moving vignettes of the individuals she meets are coupled with the sensitive photographs of Havana-based photographer Humberto Mayol, who traveled with her.

Together, Behar’s poetic and compassionate prose and Mayol’s shadowy and riveting photographs create an unforgettable portrait of a community that many have seen though few have understood. This book is the first to show both the vitality and the heartbreak that lie behind the project of keeping alive the flame of Jewish memory in Cuba.

"Traversing the island, Behar becomes a confidante to a myriad of Jewish strangers. Through one-on-one interviews and black-and-white images taken by her photographer, Humberto Mayol, she uncovers the diasporic thread that connects Cuban Jews....This diligent recounting and pictorial collage of interviews with adolescents, the aging, the impoverished and the political by Behar preserves in memory the people and places that make up Cuba's Jewish story."
— Publishers Weekly