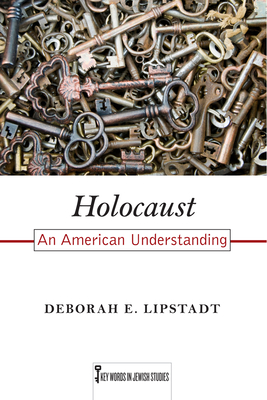 Immediately after World War II, there was little discussion of the Holocaust, but today the word has grown into a potent political and moral symbol, recognized by all.  In Holocaust: An American Understanding, renowned historian Deborah E. Lipstadt explores this striking evolution in Holocaust consciousness, revealing how a broad array of Americans—from students in middle schools to presidents of the United States—tried to make sense of this inexplicable disaster, and how they came to use the Holocaust as a lens to interpret their own history. Lipstadt weaves a powerful narrative that touches on events as varied as the civil rights movement, Vietnam, Stonewall, and the women’s movement, as well as controversies over Bitburg, the Rwandan genocide, and the bombing of Kosovo. Drawing upon extensive research on politics, popular culture, student protests, religious debates and various strains of Zionist ideologies, Lipstadt traces how the Holocaust became integral to the fabric of American life. Even popular culture, including such films as Dr. Strangelove and such books as John Hershey’s The Wall, was influenced by and in turn influenced thinking about the Holocaust. Equally important, the book shows how Americans used the Holocaust to make sense of what was happening in the United States. Many Americans saw the civil rights movement in light of Nazi oppression, for example, while others feared that American soldiers in Vietnam were destroying a people identified by the government as the enemy.    Lipstadt demonstrates that the Holocaust became not just a tragedy to be understood but also a tool for interpreting America and its place in the world. Ultimately Holocaust: An American Understanding tells us as much about America in the years since the end of World War II as it does about the Holocaust itself.

DEBORAH E. LIPSTADT is the Dorot Professor of Modern Jewish History and Holocaust Studies at Emory University in Atlanta, Georgia. Her many books include Beyond Belief: The American Press and the Coming of the Holocaust, 1933-1945, History on Trial, and The Eichmann Trial.

"Lipstadt's Holocaust: An American Understanding fulfills its editors' request for a volume that 'decipher[s]' a key word in Jewish Studies and underscores 'the points of intersection between academic disciplines and wider spheres of culture.' And to my mind, it also succeeds as a mini-intellectual and social biography of a scholar and Jewish advocate who has become one of the most remarkable Jewish women of our time."
— Antisemitism Studies

"Drawing on primary and secondary sources as well as interviews, Lipstadt’s book details the manner in which the Shoah moved from a little-understood, horrific casualty of WW II to its present impact on American culture, politics, and the US Jewish community ... Lipstadt’s exceptional book deserves to be in libraries as well as in colleges and universities that offer courses on the Holocaust and its aftermath ... Summing up: Essential. All levels/libraries."
— Choice

"Deborah Lipstadt always writes smoothly and reasons vigorously. This book is lucid, accessible, and courageous - I couldn't put it down."
— Peter Hayes

"[Holocaust] is very much an account of an American discourse on the Holocaust, and one in which Jewish voices take centre stage. For those on Jewish studies programmes in US universities, it will serve as a helpful introduction to the main trends since 1945."
— Times Higher Education

"Offer[s] yet another revealing avenue into American understandings of the Holocaust."
— Journal of American History