The Holocaust Averted: An Alternate History of American Jewry, 1938-1967 (Hardcover) 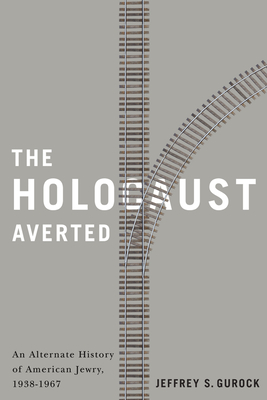 By Jeffrey S. Gurock
$150.00
This item is backordered. Please contact us for an estimated availability date.

The increasingly popular genre of “alternative histories” has captivated audiences by asking questions like “what if the South had won the Civil War?” Such speculation can be instructive, heighten our interest in a topic, and shed light on accepted history. In The Holocaust Averted, Jeffrey Gurock imagines what might have happened to the Jewish community in the United States if the Holocaust had never occurred and forces readers to contemplate how the road to acceptance and empowerment for today’s American Jews could have been harder than it actually was.
Based on reasonable alternatives grounded in what is known of the time, places, and participants, Gurock presents a concise narrative of his imagined war-time saga and the events that followed Hitler’s military failures. While German Jews did suffer under Nazism, the millions of Jews in Eastern Europe survived and were able to maintain their communities. Since few people were concerned with the safety of European Jews, Zionism never became popular in the United States and social antisemitism kept Jews on the margins of society. By the late 1960s, American Jewish communities were far from vibrant.

This alternate history—where, among many scenarios, Hitler is assassinated, Japan does not bomb Pearl Harbor, and Franklin Delano Roosevelt is succeeded after two terms by Robert A. Taft—does cause us to review and better appreciate history. As Gurock tells his tale, he concludes every chapter with a short section that describes what actually happened and, thus, further educates the reader.

JEFFREY S. GUROCK is the Libby M. Klaperman Professor of Jewish history at Yeshiva University. His most recent work, Jews in Gotham: New York Jews in a Changing City, won the 2012 Jewish Book of the Year award from the Jewish Book Council.

"This is an exciting, provocative, path-breaking book. It is complex, textured in historical detail, and full of literally hundreds of various scenarios and possibilities of 'what if.' Gurock has done a masterful job."
— Marc Dollinger

"Gurock’s book is a tour de force, on the cutting edge of an emerging genre. He has mastered American political history, European military and political history, and every aspect of American Jewry over a period of about three decades, and crafted an intelligent, entertaining, imaginative, and even suspenseful narrative. I cannot think of anyone who could have duplicated this superb book."
— Marc Lee Raphael

"With imagination and erudition, courage and wit—including a suddenly stalwart Neville Chamberlain defying Hitler at Munich and a Joseph P. Kennedy (Jr.) becoming Israel's most important friend—Jeffrey Gurock ponders how a fragile and skittish American Jewry might have evolved without Pearl Harbor and Auschwitz. His surprisingly dystopian vision, filled with familiar characters in unfamiliar and intriguing roles, is sure to challenge—and, quite possibly, to infuriate."
— David Margolick

"Hot on the trail of surprise turns and eerie parallels in this 'what if' romp through the most momentous years of 20th century history, the reader ultimately confronts the dilemmas of Jewish life today."

"If [Philip] Roth and [Quentin] Tarantino could rewrite the past, why not allow the historian - in this case Yeshiva University scholar Jeffrey Gurock - to play with facts and offer, with many of the trappings of scholarship, an imagined history?"
— Times Higher Education

"The Holocaust Averted shows how stimulating a counterfactual drawn from social history can be … Gurock's book takes a seemingly felicitous event as a divergence point, and draws dark conclusions."
— Aeon

"As magical, restorative, and nearly unconceivable it is for us, his audience, to read European Jewry back into existence, Gurock directs the readers attention elsewhere in this ambitious reimagining of twentieth-century history ... This book delivers frisson upon frisson as the world we know brushes up past its fraternal twin."
— The American Jewish Archives Journal

"Gurock has made a compelling contribution to the study of counterfactual history, relevant to both scholars and general reader alike."
— Religious Studies Review