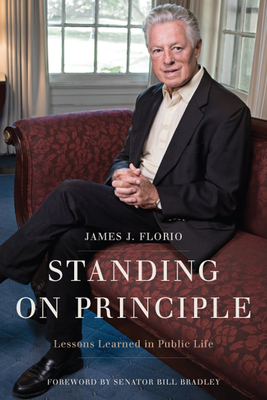 James J. Florio is best known as governor of New Jersey from 1990 to 1994. But his career in local, state, and national government is far more varied, and his achievements as a progressive reformer are more substantial than most realize.

This political memoir tells the remarkable story of how Florio, a high school dropout who left to join the Navy as a teenager, went on to become an attorney, a state assemblyman, a congressman, and a governor. A passionate defender of the environment, Florio played a crucial role in the enactment of 1980s-era Superfund laws, which helped to clean up toxic waste sites in New Jersey and around the country. As governor, he fought for the groundbreaking Clean Water Enforcement Act. But his reforms quite literally came at a cost, as he raised New Jersey sales taxes and income taxes to balance the state budget. Florio reflects upon the challenges of meeting the state’s budgetary needs while keeping his tax-averse constituents happy.

Standing on Principle reveals a politician who has never been afraid to take a progressive stand—including a firm stance against semiautomatic weapons that led gun lobbyists to bankroll his opponent. His story is sure to inspire readers from New Jersey and across the nation.

Published in cooperation with the Center on the American Governor, Eagleton Institute of Politics, Rutgers University

JAMES J. FLORIO was the forty-ninth governor of New Jersey. Since leaving office, he has worked as an activist, attorney, teacher, and speaker specializing in public policy, health care, and environmental issues.

“For decades, Jim Florio has been at the center of New Jersey public life, courageously fighting for people over special interests and working to bridge the divides that separate us. His life—vividly captured in this memoir—is an important and fascinating narrative of battles won, battles lost, and what it means to serve.”
— Cory A. Booker

"I met Jim Florio when he was in Congress and was stunned by his wealth of knowledge and his steely resolve to do the right thing. He displayed the same traits as governor even at his own peril. This book describes how he confronted the challenges he faced and how he overcame them with a self-described 'policy wonk's' intelligence and courage. A must-read for those who believe that good people can't succeed in politics."

"Jim Florio: Lessons from a life in politics and a fight over N.J.'s assault weapon ban" by Jan Hefler mention of Standing on Principle
— Philadelphia Inquirer

"An impressively informative and ultimately inspiring read that is especially recommended to the attention of anyone considering a life in public service as either an elected official or a social activist."
— Midwest Book Review