The Trials of Richard Goldstone (Hardcover) 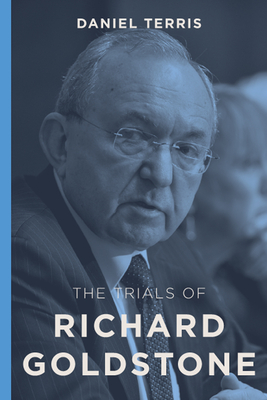 In June 2009, Richard Goldstone was a global hero, honored by the MacArthur Foundation for its prize in international justice.  Four months later, he was called a “quisling” and compared to some of the worst traitors in human history.  Why?  Because this champion of human rights and international law chose to apply his commitments to fairness and truth to his own community.

The Trials of Richard Goldstone tells the story of this extraordinary individual and the price he paid for his convictions. It describes how Goldstone, working as a judge in apartheid South Africa, helped to undermine this unjust system and later, at Nelson Mandela’s request, led a commission that investigated cases of racial violence and intimidation. It also considers the international renown he received as the chief United Nations prosecutor for war crimes committed in Rwanda and the former Yugoslavia, the first tribunals to try political and military leaders on charges of genocide. Finally, it explores how Goldstone became a controversial figure in the wake of the Jewish jurist’s powerful, but flawed, investigation of Israel for alleged war crimes in Gaza.

Richard Goldstone’s dramatic life story reveals that even in a world rife with prejudice, nationalism, and contempt for human rights, one courageous man can advance the cause of justice.

DANIEL TERRIS is dean of the Al-Quds Bard College of Arts and Sciences at Al-Quds University in East Jerusalem. He is also director emeritus of the International Center for Ethics, Justice and Public Life at Brandeis University in Waltham, Massachusetts, and a visiting professor of the humanities at Bard College in Annandale-On-Hudson, New York. He is the author of Ethics at Work: Creating Virtue in an American Corporation and coauthor of The International Judge: An Introduction to the Men and Women Who Decide the World’s Cases.

"Tracing Richard Goldstone’s remarkable career in South Africa and on the world stage, this insightful and incisive book is a nuanced portrait of a life devoted to integrity, equality, and justice."
— Kofi Annan

"In this illuminating study, Daniel Terris shows how the international system of criminal justice came into being and why it must be defended against opponents of democracy and human rights. It is a terrific work of scholarship that is timely, relevant and accessible."
— Former Secretary of State Madeleine K. Albright

"A remarkable book about a remarkable man! This work is very timely and a must-read, especially now that human rights and the rule of law are under attack even in Western democracies."
— Hans Corell

"A riveting account of an extraordinary life, and a scrupulously fair and clear-headed narrative of the agonizing story of Richard Goldstone’s Gaza report."
— Michael Ignatieff

"The Trials of Richard Goldstone captures the complexity of Goldstone and the ambiguities of his engagement. This is a very fine biography."
— William Schabas

'The Trials of Richard Goldstone': A Q&A with Daniel Terris
— Brandeis Now

"Terris does an excellent job contextualizing Goldstone’s investigations, accessibly laying out the history of the relevant conflicts, including apartheid, in a rich and nuanced fashion. This appreciative biography will inform readers about both its main subject and important currents in 20th-century world history."
— Publishers Weekly

"[The book] provides an important window into the links between lawfare and what Professor David Bernstein of George Mason University has called 'the cult of international law.'”
— The Israel Journal of Foreign Affairs