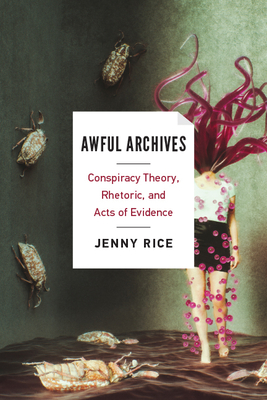 How does evidence happen? And when evidence happens badly, how can we find a fitting response to those making extraordinary claims? These are the questions driving Jenny Rice’s groundbreaking study into the life of evidence as she seeks to uncover why traditional modes of argument often fail in the face of claims that rely on bad evidence. The chapters make a deep dive into the nature and character of evidence itself by examining literal archives, though some quite unorthodox, as well as more popular archives that exist within public memory. Rice looks to examples that lie at the fringes of public discourse—pseudo-science, the paranormal, conspiracy theories about 9/11, the moon landing, UFO sightings, and Obama’s birth record. Such fringe examples, Rice argues, bring to light other questions about evidence that force us to reassess and move beyond traditional forms of ethics and debate.
After sketching a broader framework for understanding what evidence is, Awful Archives then asks how we can practice more ethical and productive forms of debate, especially when we’re faced with arguments that feel like a dead end. Thorough, engaging, and deeply insightful, Awful Archives: Conspiracy Theory, Rhetoric, and Acts of Evidence introduces an entirely new perspective on evidence—one that will impact the field for years to come.

Jenny Rice is Associate Professor at the University of Kentucky. She is the author of Distant Publics: Development Rhetoric and the Subject of Crisis.

“The book is well-positioned to avoid duplicating familiar arguments; rather, it breaks new ground and in doing so, joins rhetoric and archival work in a way that we really need right now in our current political climate. Timely.” —Kelly Ritter