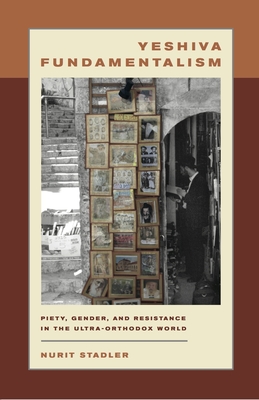 2009 Choice Outstanding Academic Title
The ultra-Orthodox yeshiva, or Jewish seminary, is a space reserved for men, and for a focus on religious ideals. Fundamentalist forms of piety are usually believed to be quite resistant to change. In Yeshiva Fundamentalism, Nurit Stadler uncovers surprising evidence that firmly religious and pious young men of this community are seeking to change their institutions to incorporate several key dimensions of the secular world: a redefinition of masculinity along with a transformation of the family, and participation in civic society through the labor market, the army, and the construction of organizations that aid terror victims. In their private thoughts and sometimes public actions, they are resisting the demands placed on them to reject all aspects of the secular world.
Because women are not allowed in the yeshiva setting, Stadler's research methods had to be creative. She invented a way to simulate yeshiva learning with young yeshiva men by first studying with an informant to learn key religious texts, often having to do with family life, sexuality, or participation in the larger society. This informant then invited students over to discuss these texts with Stadler and himself outside of the yeshiva setting. This strategy enabled Stadler to gain access to aspects of yeshiva life in which a woman is usually unable to participate, and to hear "unofficial" thoughts and reactions which would have been suppressed had the interviews taken place within the yeshiva.
Yeshiva Fundamentalism provides an intriguing -- and at times surprising -- glimpse inside the all-male world of the ultra-orthodox yeshivas in Israel, while providing insights relevant to the larger context of transformations of fundamentalism worldwide. While there has been much research into how contemporary feminism has influenced the study of fundamentalist groups worldwide, little work has focused on ultra-Orthodox men's desires to change, as Stadler does here, showing how fundamentalist men are themselves involved in the formulation of new meanings of piety, gender, modernity and relations with the Israeli state.

Nurit Stadler is Associate Professor in the Department of Sociology and Anthropology at the Hebrew University in Jerusalem. Her publications include Yeshiva Fundamentalism: Piety, Gender and Resistance in the Ultra-Orthodox (New York University Press, 2008), A Well-Worn Tallis for a New Ceremony (Academic Studies Press, 2012) and Voices of the Ritual: Devotion to Female Saints and Shrines in the Holy Land (Oxford University Press, 2020).