Memories of Two Generations: A Yiddish Life in Russia and Texas (Jews and Judaism: History and Culture) (Paperback) 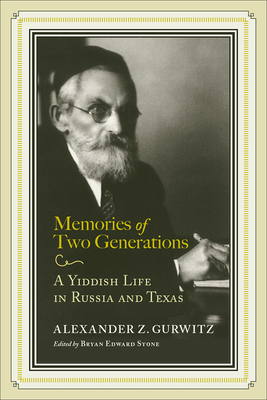 The 1935 autobiography of Alexander Ziskind Gurwitz, an Orthodox Jew whose lively recounting of his life in Tsarist Russia and his immigration to San Antonio, Texas, in 1910 captures turbulent changes in early twentieth-century Jewish history

In 1910, at the age of fifty-one, Alexander Ziskind Gurwitz made the bold decision to emigrate with his wife and four children from southeastern Ukraine in Tsarist Russia to begin a new life in Texas. In 1935, in his seventies, Gurwitz composed a retrospective autobiography, Memories of Two Generations, that recounts his personal story both of the rich history of the lost Jewish world of Eastern Europe and of the rambunctious development of frontier Jewish communities in the United States.

In both Europe and America, Gurwitz inhabited an almost exclusively Jewish world. As a boy, he studied in traditional yeshivas and earned a living as a Hebrew language teacher and kosher butcher. Widely travelled, Gurwitz recalls with wit and insight daily life in European shtetls, providing perceptive and informative comments about Jewish religion, history, politics, and social customs. Among the book’s most notable features is his first-hand, insider’s account of the yearly Jewish holiday cycle as it was observed in the nineteenth century, described as he experienced it as a child.

Gurwitz’s account of his arrival in Texas forms a cornerstone record of the Galveston Immigration Movement; this memoir represents the only complete narrative of that migration from an immigrant’s point of view. Gurwitz’s descriptions about the development of a thriving Orthodox community in San Antonio provide an important and unique primary source about a facet of American Jewish life that is not widely known.

Gurwitz wrote his memoir in his preferred Yiddish, and this translation into English by Rabbi Amram Prero captures the lyrical style of the original. Scholar and author Bryan Edward Stone’s special introduction and illuminating footnotes round out a superb edition that offers much to experts and general readers alike.

Bryan Edward Stone is a professor of history at Del Mar College in Corpus Christi, Texas, and has taught as a visiting professor at the Schusterman Center for Jewish Studies at the University of Texas at Austin. His book The Chosen Folks: Jews on the Frontiers of Texas won the Southern Jewish Historical Society Book Prize in 2011. He is the managing editor of the annual journal Southern Jewish History.

Rabbi Amram Prero was born in Jerusalem, studied at the University of Chicago, and was ordained by the Hebrew Theological College in Chicago. He served as a rabbi in Lexington, Kentucky, and Rochester, Minnesota; directed the Hillel Society at the University of Florida in Gainesville; and served as national director of the B’nai B’rith Youth Commission and the American Zionist Youth Commission. He served as rabbi of Congregation Agudas Achim in San Antonio from 1958 until 1981.

“The text itself is an insightful description of events experienced in a life lived in great extremes. . . . Gurwitz’s recollections of his days in Europe give the reader insight into a world lost to Nazi destruction. Thankfully, Bryan Stone’s commentary adds an explanative background such that the reader gains an understanding of the interaction of ideas of the times. In as much as Jewish life in Texas is still very much yet-to-be recorded history, these writings open new windows on traditional observance influenced by new Jewish movements, particularly in the United States.”
—American Jewish Archives Journal

“This exceptionally rich memoir will immediately captivate readers with an introduction that appeals to the interests of academics, yet is accessible to general readers. Poetic, with scenes of tension that impel one to keep reading, the story sustains interest throughout.”
—Jeffrey S. Gurock, author of Orthodox Jews in America

“Gurwitz's memoir provides an almost unmatched glimpse into the daily life, folk and foodways, educational system, and family patterns of traditional East European Jews of the place and time—a real-life Fiddler on the Roof. The detail of the life of a yeshivah student and young Jewish functionary, as well as of Hassidic life are extraordinary yet this story goes beyond that to show Gurwitz’s middle age attempts to maintain tradition after immigrating to San Antonio, Texas. Bryan Edward Stone’s outstanding introduction and commentary places the memoir in historical context and highlights the important themes.”
—Mark K. Bauman, editor of Dixie Diaspora: An Anthology of Southern Jewish History and coeditor of The Quiet Voices: Southern Rabbis and Black Civil Rights, 1880s to 1990s