Freedom Walkers: The Story of the Montgomery Bus Boycott (Hardcover) 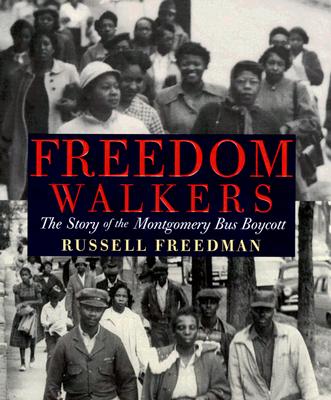 A riveting account of the civil rights boycott that changed history by the foremost author of history for young people.

Now a classic, Freedman’s book tells the dramatic stories of the heroes who stood up against segregation and Jim Crow laws in 1950s Alabama.  A master of succinct historical narratives Freeman explains the contributions of and sacrifices made by Rosa Parks and Claudette Colvin, who refused give up their seats, to Jo Ann Robinson, who began the boycott, to Martin Luther King, Jr., whose leadership was instrumental is carrying it through, and others.

Full of eye-witness reports, iconic photographs from the era, and crucial primary sources, this work brings the narratives alive for contemporary readers. A Map, source notes, a bibliography, and other backmatter make is a valuable classroom resource. The book received five starred reviews, the Flora Stieglitz Straus Award, and Jane Addams Peace Association Honor Book Award among other honors.

Russell Freedman (1929-2018) transformed non-fiction for children through his insightful narrative, comprehensive research, careful selection of photographs, and deep understanding of his subject matter. He was well known for his riveting biographies and masterful accounts of the history of the United States. One of the most honored writers for children, his many awards include the Newbery Medal, three Newbery Honor Medals, the Laura Ingalls Wilder Award, the May Hill Arbuthnot Honor Lecture Award and a National Humanities Medal. Major works include Freedom Walkers, Lincoln: A Photobiography, Because They Marched, The Wright Brothers: How They Invented The Airplane.

★ "A dramatic overview of how the 381-day resistance to segregated buses spearheaded the civil rights movement...Eloquent."—Booklist, Starred Review

★ "Expertly paced text, balanced but impassioned...Such is the immediacy of Freedman's telling that by the time Martin Luther King Jr. steps onboard and takes 'a seat at the front of the bus,' readers will feel like cheering, as if they're witnessing the historic moment themselves."—The Horn Book, Starred Review