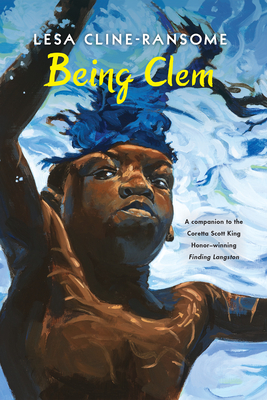 This is book number 3 in the The Finding Langston Trilogy series.

Clem can make anybody, even his grumpy older sisters, smile with his jokes. But when his family receives news that his father has died in the infamous Port Chicago disaster, everything begins to fall apart. Clem's mother is forced to work long, tough hours as a maid for a wealthy white family. Soon Clem can barely recognize his home--and himself. Can he live up to his father's legacy?

In her award-winning trilogy, Lesa Cline-Ransome masterfully recreates mid-twentieth century America through the eyes of three boys: Langston, Lymon, and, now, Clem. Exploring the impact of the Great Migration, the Harlem Renaissance, Jim Crow laws, and much more, Lesa's work manages at once to be both an intimate portrait of each boy and his family as well as a landscape of American history.

"There aren't any explosions in this spare story. Nor is there a happy ending. Instead, Langston discovers something more enduring: solace."--The New York Times

* "This is a story that will stay with readers long after they've finished it."--School Library Journal, Starred Review

* "The impact on the reader could not be more powerful. A memorable debut novel."--Booklist, Starred Review

* "A fascinating work of historical fiction . . . Cline-Ransome at her best."--Kirkus Reviews, Starred Review

* "Finding Langston is about cultural heritage and personal growth and, at its heart, about finding home wherever you land."--Shelf Awareness, Starred Review

Lesa Cline-Ransome is the author of almost twenty books for young readers, including Before She was Harriet and the Finding Langston trilogy. Her work has received a plethora of honors, including dozens of starred reviews, NAACP Image Award nominations, a Coretta Scott King Honor, and a Christopher Award, and has been named to ALA Notable Books and Bank Street Best Children's Books lists. She lives in Rhinebeck, NY.

★ "Cline-Ransome’s mastery of first person narration and her gift for dialogue present a close-up look at Chicago’s African American community in the 1940s. . . . While readers will miss this group of Cline-Ransome’s memorable characters, Clem’s story is a satisfying end to the series." —The Horn Book, Starred Review

★  "Like the other two entries, this novel with its parallel narrative addresses tough situations with care, including parental grief and depression, the threat of eviction, domestic abuse, the emotional and physical abuse of children, the impact of racism, and negotiating problematic friendships. A compelling work whose intriguing characters readers will miss when they turn the last page." —Kirkus Reviews, Starred Review

★ "[Lesa] Cline-Ransome skillfully brings the era of 1944 middle America to life, giving readers a glimpse of an often neglected part of history—growing up Black through the segregation and discrimination in the North during this time period. . . . ­Exceptional characters and the chance to explore the previous volumes will leave readers wanting more. The historical aspect of the novel encourages further exploration of the era and a greater understanding of race in America during this time. This whole series deserves a place on library shelves ­everywhere."—School Library Journal, Starred Review

★ "In addition to exploring Clem’s relationships with his friends, Cline-Ransome offers unusually perceptive portrayals of his family members, their interactions, and their strong, ongoing, but largely unspoken grief. Clem’s engaging first-person story, written with simplicity and emotional clarity, provides a rewarding conclusion to this historical fiction trilogy."—Booklist, Starred Review

"Cline-Ransome incorporates events of mid-century American history so seamlessly, young readers may not realize they're absorbing real historical facts. . . . Works beautifully as a stand-alone or as a companion to the earlier novels in the trilogy."—Shelf Awareness

"In this final title of Cline-Ransome’s historical fiction trilogy, Clem steps fully into the limelight, and the Thurbers’ story sensitively explores another facet the Black community on Chicago’s South Side during the 1940s, as government bias against Black servicemen causes a proud family to lose its tenuous grip on prosperity."—The Bulletin of the Center for Children’s Books