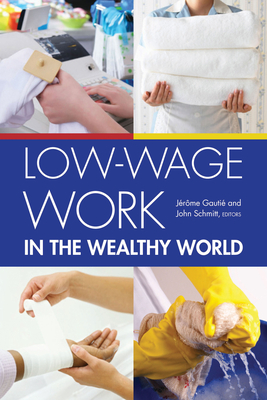 By Jerome Gautie (Editor), John Schmitt (Editor)
$63.25
This item is backordered and not currently available. Please contact us for an estimated availability date.

As global flows of goods, capital, information, and people accelerate competitive pressure on businesses throughout the industrialized world, firms have responded by reorganizing work in a variety of efforts to improve efficiency and cut costs. In the United States, where minimum wages are low, unions are weak, and immigrants are numerous, this has often lead to declining wages, increased job insecurity, and deteriorating working conditions for workers with little bargaining power in the lower tiers of the labor market. Low-Wage Work in the Wealthy World builds on an earlier Russell Sage Foundation study (Low-Wage America) to compare the plight of low-wage workers in the United States to five European countries—Denmark, France, Germany, the Netherlands, and the United Kingdom—where wage supports, worker protections, and social benefits have generally been stronger. By examining low-wage jobs in systematic case studies across five industries, this groundbreaking international study goes well beyond standard statistics to reveal national differences in the quality of low-wage work and the well being of low-wage workers. The United States has a high percentage of low-wage workers—nearly three times more than Denmark and twice more than France. Since the early 1990s, however, the United Kingdom, the Netherlands, and Germany have all seen substantial increases in low-wage jobs. While these jobs often entail much the same drudgery in Europe and the United States, quality of life for low-wage workers varies substantially across countries. The authors focus their analysis on the "inclusiveness" of each country's industrial relations system, including national collective bargaining agreements and minimum-wage laws, and the generosity of social benefits such as health insurance, pensions, family leave, and paid vacation time—which together sustain a significantly higher quality of life for low-wage workers in some countries. Investigating conditions in retail sales, hospitals, food processing, hotels, and call centers, the book's industry case studies shed new light on how national institutions influence the way employers organize work and shape the quality of low-wage jobs. A telling example: in the United States and several European nations, wages and working conditions of front-line workers in meat processing plants are deteriorating as large retailers put severe pressure on prices, and firms respond by employing low-wage immigrant labor. But in Denmark, where unions are strong, and, to a lesser extent, in France, where the statutory minimum wage is high, the low-wage path is blocked, and firms have opted instead to invest more heavily in automation to raise productivity, improve product quality, and sustain higher wages. However, as Low-Wage Work in the Wealthy World also shows, the European nations' higher level of inclusiveness is increasingly at risk. "Exit options," both formal and informal, have emerged to give employers ways around national wage supports and collectively bargained agreements. For some jobs, such as room cleaners in hotels, stronger labor relations systems in Europe have not had much impact on the quality of work. Low-Wage Work in the Wealthy World offers an analysis of low-wage work in Europe and the United States based on concrete, detailed, and systematic contrasts. Its revealing case studies not only provide a human context but also vividly remind us that the quality and incidence of low-wage work is more a matter of national choice than economic necessity and that government policies and business practices have inevitable consequences for the quality of workers' lives. A Volume in the Russell Sage Foundation Case Studies of Job Quality in Advanced Economies

JÉRÔME GAUTIÉ is professor of economics at the University of Paris 1 Panthéon-Sorbonne. JOHN SCHMITT is senior economist with the Center for Economic and Policy Research in Washington, D.C.