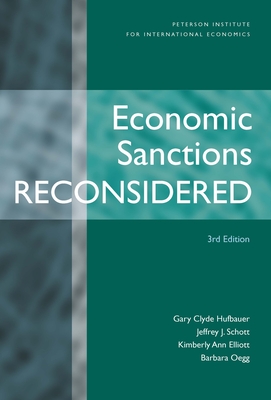 By Gary Clyde Hufbauer, Jeffrey Schott, Kimberly Ann Elliott
This item is backordered and not currently available. Please contact us for an estimated availability date.

Economic sanctions continue to play an important role in the response to terrorism, nuclear proliferation, military conflicts, and other foreign policy crises. But poor design and implementation of sanctions policies often mean that they fall short of their desired effects. This landmark study, first published in 1985, delves into the rich experience of sanctions in the 20th century to harvest lessons on how to use sanctions more effectively. This volume is the updated third edition of this widely cited study. It chronicles and examines 170 cases of economic sanctions imposed since World War I. Fifty of these cases were launched in the 1990s and are new to this edition. Special attention is paid to new developments arising from the end of the Cold War and increasing globalization of the world economy. Analyzing a range of economic and political factors that can influence the success of a sanctions episode, the authors distill a set of commandments to guide policymakers in the effective use of sanctions.

Gary Clyde Hufbauer, Reginald Jones Senior Fellow since 1992, was formerly the Maurice Greenberg Chair and Director of Studies at the Council on Foreign Relations (1996-98), the Marcus Wallenberg Professor of International Finance Diplomacy at Georgetown University (1985-92), senior fellow at the Institute (1981-85), deputy director of the International Law Institute at Georgetown University (1979-81); deputy assistant secretary for international trade and investment policy of the US Treasury (1977-79); and director of the international tax staff at the Treasury (1974-76). Jeffrey J. Schott joined the Peterson Institute for International Economics in 1983 and is a senior fellow working on international trade policy and economic sanctions. During his tenure at the Institute, Schott was also a visiting lecturer at Princeton University (1994) and an adjunct professor at Georgetown University (1986-88). He was a senior associate at the Carnegie Endowment for International Peace (1982-83) and an official of the US Treasury Department (1974-82) in international trade and energy policy. During the Tokyo Round of multilateral trade negotiations, he was a member of the US delegation that negotiated the GATT Subsidies Code. Since January 2003, he has been a member of the Trade and Environment Policy Advisory Committee of the US government. He is also a member of the State Department's Advisory Committee on International Economic Policy. Kimberly Ann Elliott, former visiting fellow, is a senior fellow at the Center for Global Development. She is the author or coauthor of numerous books and articles on a variety of trade policy and globalization issues. Much of her work focuses on the uses of economic leverage in international negotiations, including both economic sanctions for foreign policy goals and trade threats and sanctions in commercial disputes. Barbara Oegg is a consultant to the Peterson Institute for International Economics. She was a research associate at the Institute from 1998 to 2004. She has coauthored numerous articles on economic sanctions, including The Impact of Economic Sanctions on US Trade: Andrew Rose's Gravity Model (2003), Capital-Market Access: New Frontier in the Sanctions Debate (2002), and Using Sanctions to Fight Terrorism (2001).