The Declaration, the Sword and the Spy: Volume 6 (Epic Order of the Seven #6) (Paperback) 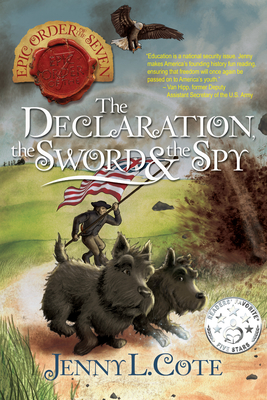 "THE BRITISH ARE COMING " . . . but so are THE FRENCH A spy in the Sons of Liberty threatens to crush the patriot cause on the eve of war, but who will fire the first shot at Lexington and launch the American Revolution? The Marquis de Lafayette commits his sword to fight as France seeks to secretly support the American cause with spies on both sides of the Atlantic. Following Bunker Hill, George Washington faces the impossible task of driving the British from Boston with an undisciplined army and no gunpowder or cannons. As Congress debates Independence, Thomas Jefferson pens a Declaration--but it will never see the light of day if the vote isn't unanimous. The Epic Order of the Seven animal team must assist the Founding Fathers with espionage and numerous miracles to win this war for American Independence while a new, evil enemy seeks to slaughter the patriots and their commander in the field. But which will be the more dangerous--the enemy without or the enemy within? Covering the events from March 1775 to July 1776, this second book in Cote's Epic Revolutionary Saga tells of the incredible yet lesser-known struggles of the war before Independence.

Award-winning author and speaker Jenny L. Cote, who developed an early passion for God, history, and young people, beautifully blends these three passions in her two fantasy fiction series, The Amazing Tales of Max and Liz(R) and Epic Order of the Seven(R). Likened to C. S. Lewis by readers and book reviewers alike, she speaks on creative writing to schools, homeschools, universities and conferences around the world. Jenny has a passion for making history fun for kids of all ages, instilling in them a desire to discover their part in HIStory. Her love for research has taken her to most Revolutionary sites in the U.S., to London (with unprecedented access to Handel House Museum to write in Handel's composing room), Oxford (to stay in the home of C. S. Lewis, 'the Kilns', and interview Lewis' secretary, Walter Hooper at the Inklings' famed The Eagle and Child Pub), Paris, Normandy, Rome, Israel, and Egypt. She partnered with the National Park Service to produce Epic Patriot Camp, a summer writing camp at Revolutionary parks to excite kids about history, research and writing. Jenny has been featured by FOX NEWS on Fox & Friends and local Fox Affiliates, as well as numerous Op-Ed pieces on FoxNews.com. She has also been interviewed by nationally syndicated radio and print media, as well as international publications. Jenny holds two marketing degrees from the University of Georgia and Georgia State University. A Virginia native, Jenny now lives with her family in Roswell, Georgia. In addition to researching and writing future books in her series, Jenny produced the audio version of The Ark, the Reed, and the Fire Cloud, a VBS Curriculum based on her books, Heroes of HIStory.