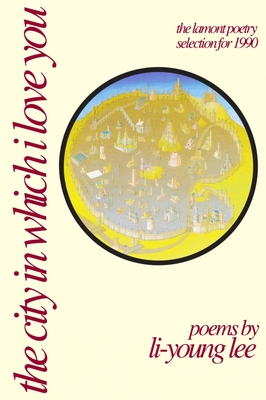 This is book number 20 in the American Poets Continuum series.

Contents I.
Furious Versionis II.
The Interrogation
This Hour And What Is Dead
Arise, Go Down
My Father, In Heaven, Is Reading Out Loud
For A New Citizen Of These United States
With Ruins III.
This Room And Everything In It
The City In Which I Love You IV. The Waiting
A Story
Goodnight
You Must Sing
Here I Am
A Final Thing V.
The Cleaving.

Li-Young Lee was born in 1957 in Jakarta, Indonesia, of Chinese parents. In 1959 his father, after spending a year as a political prisoner in President Sukarno's jails, fled Indonesia with his family. Between 1959 and 1964 the Lee family traveled throughout Hong Kong, Macau and Japan, until arriving in America. Li-Young Lee's first poetry collection, Rose, won the New York University's 1986 Delmore Schwartz Memorial Poetry Award. His second collection, The City In Which I Love You, was the 1990 Lamont Poetry Selection of the Academy of American Poets. His third collection, Book of My Nights, was awarded the 2002 William Carlos Williams Award from the Poetry Society of America. In September 2006, BOA Editions published Breaking the Alabaster Jar: Conversations with Li-Young Lee, edited by Earl G. Ingersoll. This book collects the best dozen interviews Li-Young Lee has granted since the 1986 publication of Rose, including the 1988 interview with Bill Moyers on his The Power of the Word series. Breaking the Alabaster Jar contains new insights on Li-Young Lee's aesthetics, history, and various philosophies. Breaking the Alabaster Jar is an invaluable companion to Li-Young Lee's previous award-winning poetry collections. Li-Young Lee currently lives in Chicago, Illinois, with his wife Donna and their two children.