Until They Bring the Streetcars Back (Paperback) 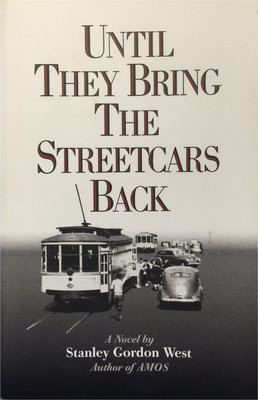 1949 St. Paul, MN - that hopeful post-war era where streetcars graced the city, drive-ins bloomed, the internet and shopping centers didn't exist and people hadn't yet fled to the suburbs.

Upon this fertile urban landscape, Stanley West has set his rich, profoundly touching novel, the gripping story of young Cal Gant, who, despite the shelter of his idyllic life, his rollicking friends, and the mesmerizing girl he loves, stumbles onto and unthinkable lair of violence, terror and murder.

When the haunting Gretchen Luttermannn draws him into a strange and secret lie, he finds himself in a heart-stopping struggle with her brutal father, leading Cal to the brink of self-doubt, terror and death itself, where he must find within himself the backbone and daring to stand against the horror.

When he refuses to turn away, the heart-shattering choices he makes and the terrifying path he takes will raise hairs on the back of your neck, leave a catch in your throat and bring your heart to its feet, cheering.

Stanley Gordon West was born in St. Paul, MN and grew up during the Great Depression and the World War II years. He graduated from Central High School in 1950 and attended Macalester College and the University of Minnesota, earning a degree in history and geology in 1955. He moved from the midwest to Montana in 1964 where he raised a large family. Stanley wrote several novels, including AMOS: To Ride a Dead Horse, which was produced as a CBS Movie of the Week starring Kirk Douglas, Elizabeth Montgomery and Dorothy McGuire and was nominated for four Emmys. You Are My Sunshine was his last work before his passing in 2015.