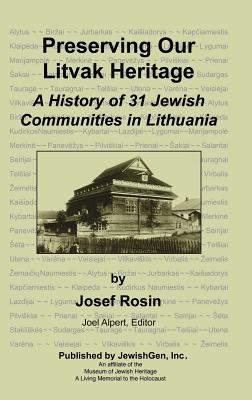 Josef Rosin's "Preserving Our Litvak Heritage" is a monumental work documenting the history of 31 Jewish communities in Lithuanaia from their inception to their total destruction in 1941 at the hands of the Nazis and their Lithuania helpers. Rosin gathered his material from traditional sources, archives, public records, and remembrance books. He has enriched and enhanced the entry for each community with personal memoirs and contributions from widely dispersed survivors who opened family albums and shared treasured photographs of family and friends. He made use of sources originally written in Hebrew, Yiddish, Lithuanian, German and Russian. In over 700 pages, Rosin documents each community from its beginning until World War I, through the years of Independent Lithuania (1918-1940), and finally during the indescribable Nazi annihilation of nearly all of Lithuanian Jewry. Most impressive is the record of cultural richness, the important town personalities, the welfare institutions, the glorious Hebrew educational system of the Tarbuth elementary schools and the Yavneh high schools, the world famous Telz and Ponevezh Yeshivoth (in the towns of Telsiai and Panevezys), the Yiddish press and other significant events of the period. Rosin has provided a documentary and a testament to once vibrant communities almost totally destroyed but which come alive again in the pages of this book. 736 page, Hard Cover. List of towns included in the book: Alite Birzh Yurburg Koshedar Kopcheve Memel Naishtot Kibart Lazdey Ligum Mariampol Meretch Ponevezh Pikvishok Pren Shaki Salant Serey Shat Stoklishok Sudarg Tavrig Taragin Telzh Utyan Aran Vishey Vilkovishk Verzhbelov Zheiml Naishtot Tavrig 786 page, Hard Cover.