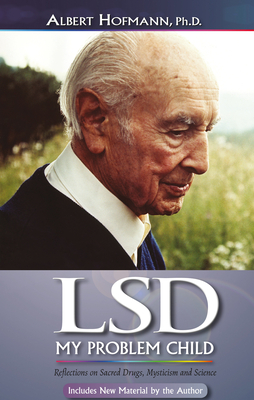 LSD My Problem Child is the story of LSD told by a concerned yet hopeful father and organic chemist, the late Albert Hofmann, PhD.Credited with synthesizing and discovering the psychedelic effects of LSD, Hofmann traces the path of the drug from a promising psychiatric research medicine to a recreational drug sparking hysteria and prohibition. In LSD: My Problem Child, Dr. Hofmann documents his trek across Mexico to discover sacred plants related to LSD and shares correspondences with notable figures including Timothy Leary, Aldous Huxley and Walter Vogt. The underlying current of this book is Dr. Hofmann's powerful conclusion that mystical experiences may be our planet's best hope for survival. Whether induced by LSD, meditation, or arising spontaneously, such experiences help us to comprehend, as Hofmann wrote, "the wonder, the mystery of the divine, in the microcosm of the atom, in the macrocosm of the spiral nebula, in the seeds of plants, in the body and soul of people." More than sixty years after the birth of Albert Hofmann's problem child, his vision of its true potential is reaching relevancy as psychedelics enjoy a new resurgence in popular discourse. In 2022, Hofmann's pioneering work was featured in the Netflix documentary series, "How to Change Your Mind."