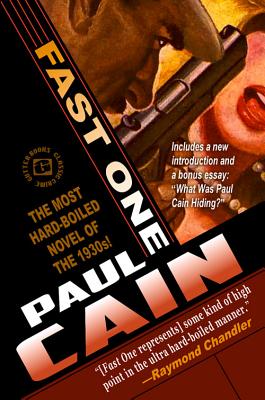 It's the last days of Prohibition and the first days of the Depression and East Coast crime bosses are vying for control of Los Angeles. Caught in the middle of the intrigues is Gerry Kells, a former New York enforcer now living a life of ease on the West Coast. As the fiercely independent Kells rejects the appeals of various crime bosses who want to make use of his talents, powerful forces align against him. Being framed for a murder turns out to be the least of his troubles and as the stakes get higher, and the odds get longer, it's only Kells' nerve and toughness that keep him one step ahead of the law-and the reaper. Featuring one of the most brutal finales in crime fiction history, this lost 1933 masterpiece took hard-boiled writing as far is it safely could. Some say too far.

The chosen replacement for Dashiell Hammett at Black Mask magazine in the early 1930s, Paul Cain set out to write the leanest, toughest crime stories anyone had ever read. The author is equally well-known as the screenwriter Peter Ruric, famous for writing the screenplay for the horror classic, The Black Cat. Not until after his death was it discovered that the author was not Paul Cain or Peter Ruric, but was actually born in Iowa as George Carol Sims. The Gutter Books edition of Fast One Includes an introduction and bonus essay, both of which explore what might have driven Cain/Ruric/Sims to hide his true identity throughout his life.

“In the matter of grim hardness Dashiell [Hammett] paused on the threshold. Paul [Cain] went all the way.”  —Captain Joe Shaw, editor of Black Mask during its golden era

“[Fast One represents] some kind of high point in the ultra hard-boiled manner.”  —Raymond Chandler, author, The Big Sleep