Kaddish: Before the Holocaust and After (Paperback) 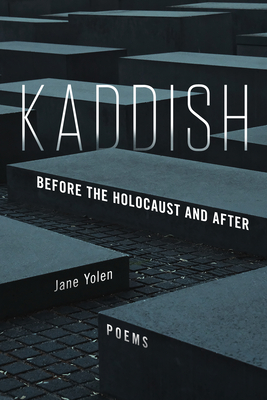 Kaddish, the Jewish prayer for the dead, is recited in a time of deep sorrow. In it, the sacredness of the Almighty One is affirmed. In her new gathering of sixty poems, award-winning author Jane Yolen gives us a feminist view of Biblical themes and personalities such as Eve, Sarah, David and Goliath. The poems then morph into those about the Holocaust and after. Yolen's unflinching and stark record of the many death camp horrors serve as reminders of that era's brutality and the unrelenting suffering visited upon an innocent people. "Knowing means remembrance," Yolen writes--as each poem becomes a memorial, a teaching, a warning for our and future generations. Her book concludes: "... no Jew truly escapes/that time, those places, /unscarred, unscathed./I have no numbers on my arms, /But I have studied the charts, /the cities, the deaths, /till I know them by heart.

Jane Yolen, called the Hans Christian Andersen of America because of her work with fairy tales, is also a fine poet. Kaddish is her 13th book of poems for adult readers. In March, 2021 her 400th book was published. She works across all genres--children's books and adult books: science fiction, fantasy, historical novels, storybooks, short stories, cookbooks, music books, nonfiction, anthologies, collections--even a novel in verse. She has written musicals, and the lyrics for many bands. She writes a poem a day which she sends to over a thousand subscribers. Six colleges and universities have given her honorary doctorates for her body of work. Her latest awards have been from the Jewish Book Council, the World Fantasy Association, a Massachusetts State Book Award, and a nomination by the USA for the International Astrid Lindgren Award. She lives in New England and in Scotland. If you need to know more about her, visit her website at: www.janeyolen.com. She is the author of three previously published poetry books from Holy Cow! Press: Things to Say to a Dead Man: Poems at the End of a Marriage and After (2011); Ekaterinoslav: One Family's Passage to America (2012); and The Bloody Tide: Poems about Politics and Power (2014).