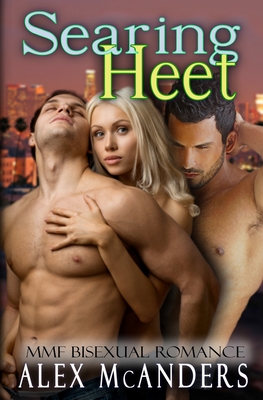 A bad boy billionaire, an angsty ex-football player with a mysterious past, and the curvy woman who uncovers secrets, fall into an MMF bisexual romance. A fake relationship leads to, a first time gay relationship, sizzling encounters, and longtime best friends giving in to their heart-aching passion.

Everything else in her life might be a mess, but Dani Spelling is the best investigative reporter you'll ever meet. Her father-figure editor wants her to take over his job when he retires. But the billionaire owner of the company wants to give it to Jax Watt, the brooding sports reporter who turns her into a schoolgirl with a crush every time he speaks.

She can't let her editor down. So when the billionaire asks her to pretend to be his girlfriend for an event, she sees her way in.

Is it? Or, is there something deeper going on between the drool-worthy men? Is there a story there? And, does the story end with the two gorgeous men naked in her bed?

Heet Ray had no interest in inheriting his father's billion dollar media empire. What interested him was Jax Watt, his college best friend. Heet might not have figured out his feelings for Jax, but he does know that he will go anywhere and spend anything to have Jax by his side.

So, what will happen when Jax falls for a beautiful reporter who is intent on keeping them apart? It starts with Heet asking her to pretend to be his girlfriend for an evening. What will happen next? Only Heet knows.

After eight years as a professional football player, an injury turned Jax Watt into someone who reported the sports instead of playing it. But that wasn't what turned him into the moody, brooding man he became. That was because of the mountain of secrets he was guarding.

Did those secrets involve the way he felt about Heet, his college best friend and now boss? Did they involve Dani, the curvy co-worker he desperately wanted in his bed? Or, did Jax's secrets revolve around something from his past that threatened to destroy his life and the lives of everyone around him?

Maybe he shouldn't get into a complicated, mixed up love triangle with his best friend and a reporter who will stop at nothing to get promoted. There is no way a relationship like that could end well... Or, is that exactly what they all need to live happily ever after?

'Searing Heet' is a steamy bisexual romance with twists, turns and heat. Loaded with enough MM, MFM, and MMF scenes to make your toes curl, it will leave you satisfied with its not-to-be-missed HEA ending.