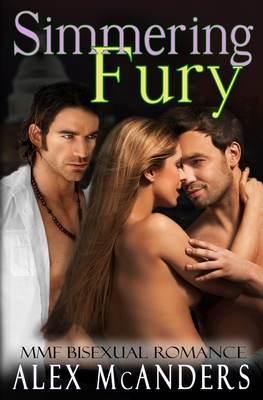 Olive has a weakness, ambitious men. That means whenever she is around Duke Bradon, the youngest governor ever in the largest state in the country, she can barely contain herself. Not only does the man know what he wants, he's drool-worthy good-looking enough to get it. So, when Duke plucks her out of his campaign office for a special favor, she is beside herself.

But, why would a man like Duke Bradon need a curvy girl like her to pretend to be his girlfriend for a public event? Then, when the press makes them the next "it" couple and Duke decides to run for president, what does that mean for them? Fury Rhoades, Duke's largest campaign donor, has ideas. And when one of those ideas involves the three of them naked in bed, Olive is sure that nothing could possibly go wrong.

The world sees Fury Rhoades as the worst kind of playboy, billionaire. He parties too hard, sleeps around too much, and only cares about himself. But there's a reason for that. Born with everything, there was only one thing Fury ever wanted, his best friend, Duke Bradon. But Fury knew Duke's ambition, and it couldn't involve anyone like Fury on his arm. So instead, Fury drank, slept with every beautiful woman he could find, and gave Duke millions to help him fulfill his dream.

But, something changes when Duke introduces him to Olive, his latest date. She brings things out of Duke that Fury has never seen before. Could Fury end up getting everything he ever wanted with Duke and the woman that has changed his best friend? Or will Duke break Fury's heart again by brushing him aside in pursuit of the only thing Duke has ever wanted?

Duke Bradon's ambitions were so large that after leading Harvard's football team to national championships, he turned down going pro to become the youngest governor in California's history. But Duke considered that just the beginning. There was only one problem, he has been in love with his male best friend since he was 16 and the country wasn't ready for a gay president.

So when Duke meets Olive, a devoted employee with a wicked sparkle in her eyes, he comes up with a plan. He'll pretend to date Olive while really dating Fury. But when Fury takes a mysterious trip, things get complicated with his irresistible employee. What makes things more complicated is Duke's haunting secret.

Will Duke choose the dream he's had his entire life, or the love of a family? He can only have one. Before Olive the decision had always been clear. But now with both Fury and Olive in his life, the decision might tear him apart.

'Simmering Fury' is a steamy bisexual romance with twists, turns and heat. Loaded with enough MM, MFM, and MMF scenes to make your toes curl, it will leave you satisfied with its not-to-be-missed HEA ending.